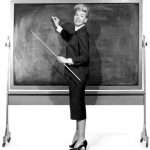 Once, I was called upon to make the presentation at the retirement of a primary school teacher. It was a poignant occasion, (especially if you have to try to make the speech to say ‘thank you’). After decades of teaching the youngest children, she was calling it a day, as gentle and kind and patient as I believe she had been throughout her career. It was sobering to think how many lives she had shaped.

Primary school teachers in small schools had an extraordinary power to influence us, for good or for ill. They were people held in extraordinarily high regard. In at least one part of rural Co Down, in the early 1990s, the headmaster of the local Catholic primary school was still referred to as ‘Master’ so and so, rather than as just plain ‘Mister’. It made the point that here was a man who was important to the community.

Perhaps it’s not just the attitude we have towards them, perhaps it’s also the way we treat them. Teaching salaries were never going to make anyone rich, but I suspect they used to go much further. School teachers, if they did not live in the schoolhouse, would have had good houses in villages. Now their salaries would not go near buying the sort of houses their predecessors occupied. In a society where someone’s worth is often reckoned by how much they earn, where do we put the teachers?

When I was young we didn’t even know what teachers Christian names were, they were just ‘Miss’, even if they were ‘Mrs’, (in primary schools, ‘Mr’ was rare). I only discovered that the headmistress of the first primary school I attended was called ‘Susan’ at a wedding I attended in Dublin in 1999 – a different country and thirty-two years later to discover that Miss Todd had a Christian name!

I thought about Miss Todd yesterday, working away the years at Long Sutton. She used to have groups of children to play board games in her house at lunch times. I remember having no idea about how to play the game, but at being overawed to be in Miss Todd’s house. (Miss Todd was the niece of the Archbishop of Canterbury and had been to Lambeth Palace – lots of times!) Miss Todd must have felt frustrated at times, most of us would not have been the most exciting or inspiring of pupils, but my only memories of her are of a firm and gracious lady.

On All Saints’ Day, when we recall the good and faithful down through the generations, I think I would want to put amongst them Miss Todd and Miss Everitt and Miss Rabbage, without whose efforts the lives of hundreds of Somerset children would have been very different.