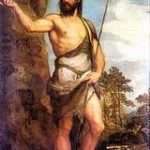 “And people from the whole Judean countryside and all the people of Jerusalem were going out to him, and were baptized by him in the river Jordan, confessing their sins.” Mark 1:5

Why did they go?

It’s a question Jesus would himself ask. In Saint Matthew Chapter 11 and Saint Luke Chapter 7, he quizzes them about what they sought in John the Baptist, a reed shaken by the wind, a man dressed in fine clothes, a prophet? ‘What did you go out to see?’ he asks and it is a challenge, a probing, as to what is in their hearts.

‘People from the whole Judean countryside’ went out to see John, Saint Mark tells us, ‘and all the people of Jerusalem’. John has attained celebrity status, the ordinary people flock to hear him, but so do the rich and the powerful. What was their motivation? What took them out to this barren, inhospitable place to hear the words of this radical preacher?

Some came looking for spiritual renewal, some came because they were curious. Some, we know from John’s denunciation of them as a ‘brood of vipers’ in Saint Luke Chapter 3, saw John as dangerous, a threat to the established order of things.

What people saw in John depended on what was in their hearts as they went out to hear him. They could have gone to that rough and wild place and seen an odd and eccentric man, a man dressed in a primitive way, hair and beard unkempt, skin weathered and cracked by the elements; a man whose diet was locusts and wild honey; a man who cared nothing for polite company or social etiquette. They could have gone to see John and returned to their homes with tales of a strange sight and wild words.

Jesus’ question is a challenge to move beyond appearances, to look for deeper truths. To the authorities, he is a rabble rouser, a troublemaker, someone whose removal would be convenient; they do not see beyond their perception of what suits themselves. It is those who can discern the deeper things who see John as he is. They see beyond the physical facts to the spiritual truth; they see God’s grace in the ministry of this homeless preacher.

John is seen as a prophet because there is a capacity to see deeper things; it is that capacity we need to rediscover ourselves.

The coming Christmas season is probably the worst time of the year for concern with the superficial, the surface things, the trivial things. Listen to conversation about Christmas and what do we hear discussed? Presents, parties, meals, money—a festival of mass materialism. Where in all the talk is there any mention of the spiritual, where is there any seeking after anything deeper?

Haven’t we become like those who might have gone out to see John the Baptist and seen nothing more than a bearded man dressed in rags? Haven’t we lost sight of the profound, the deep truth of what is being celebrated?

Going out into the wilderness, standing amongst the crowds listening to the preaching, what would we have heard? If our hearts had been open, we would have heard God speaking to us, but that would depend upon us, upon our willingness to hear. When Jesus talks of John’s ministry, he speaks of a need for people to make their own response, ‘Whoever has ears, let them hear’, he says in Matthew 11:15.

Approaching Christmas, what will we make of the things we hear? As we hear the story told repeatedly in the coming weeks, have we become immune to its power? Have we forgotten what it is saying to us? Do we listen to the tale of angels, shepherds and wise men and make no more of it than someone who was no more than casually interested listening to John the Baptist?

As John the Baptist prepared the way for the coming of Jesus, so the willingness of his listeners to hear and see God’s presence should set an example for us to prepare a way in our own lives.

‘What did you go out to see?’ asks Jesus of those who went out to see John the Baptist.

As we attend Christmas services over the coming weeks, he might ask us that same question, ‘What did you go out to see?’

Had we been among the crowd in the wilderness, listening to John the Baptist, what sort of listeners would we have been—one of casually curious or one of those to whom Jesus said, ‘Whoever has ears, let them hear.’ 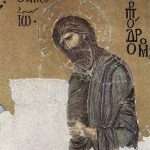