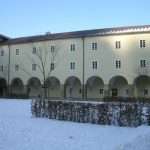 ‘Reverend Ian, you would not sing at the old folks’ Christmas party!’ The bubbly young mother at the parent and toddler group looked accusingly at me.

‘I can’t. I was told professionally, I can’t. The man told me that it would be better for everyone if I did not sing’.

He was, of course, right, I cannot carry a note in a bucket, my entire vocal range probably extends across three notes in the bass line, and even they would be sung in the wrong places. But I felt hurt at the time.

Singing had been a big thing in my childhood days. I could never play the recorder or the Glockenspiel, it being reserved for a very talented girl called Audrey, but I could sing along with everyone else in my primary school class. Every week we tuned in to ‘Singing Together’, on BBC radio for schools.

‘Singing Together’ is deep in the consciousness of those of us of a certain age. One wet evening in France five years ago, I texted everyone I knew who had been to a British primary school and asked which songs they remembered. I got a few sniffy replies, but my sister in Belfast came back with a list of about ten songs.

‘Singing Together’, in retrospect, was a deeply subversive programme. There were traditional, fun, sing-along songs, things like ‘Antonio, it’s raining again’. But there were some songs that gently challenged our Anglo-Saxon view of the world like the 17th Century Huron Carol. There were even songs that were downright radical and would surely have prompted letters to the ‘Daily Telegraph’ if it had been know that primary school children were encountering such lyrics.

My first encounter with the Irish famine was in the words of ‘The praties they grow small’. I remember feeling aghast that Britain, which I had always been taught stood for freedom and justice, should trample people in the dust. My sister recalls the words of ‘Blackleg miners’, how it got past Education Secretary Margaret Thatcher is a mystery!

I don’t mind not being able to sing, what I fear is a loss of singing in our culture. The tales that were told in our folk songs will not be carried by the banality of the average iPod download. It is not just music that will be lost, it is something of the truth about the society in which we live, and losing the truth can never be a good thing.

Perhaps I should learn a song for next Christmas, ‘On Raglan Road’ or ‘Four Green Fields’, something that can be ground out in three notes from the bass line. It would persuade them it was better to sing together.

P.S. You’re a real singer if you can identify from which film this cloister comes!

P.P.S. On reflection, Brendan Behan’s ‘The Aul’ Triangle’ is probably the best for someone who has to grind out a song.