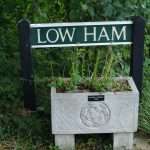 How many times had I ever stopped in a hamlet a mile from our doorstep?

The visits recalled could be numbered on the fingers of one hand. There had been a cycle ride to a farm to buy vegetables from a local farmer. There had been a call to a thatched cottage where the conversation of the adults allowed children to go unattended until long past the usual bedtime. There had been a Christmas carol service in the medieval church that stood in the middle of a farmer’s field. And there had been an evening spent in the local chapel, lured by the prospect of ‘goodies’ if we sat and listened to the preacher and joined in the songs – the pencil we each received seemed a poor return on foregoing the chance to spend the time playing football or riding the bike. Otherwise, we would have just passed through, rolling along at 20 mph, for to travel faster would have endangered oneself and others on roads where livestock and tractors assumed priority.

Despite not stopping, the car journey must have been made literally hundreds of times – even once a week for twenty-odd years would have been a thousand passes through the hamlet. A place seen that often should have fixed itself in the memory to the point where every detail might be described decades later, yet walking the road in the fading late summer light, things seemed to have moved, distances altered, there were even farmhouses that had not been there before – but, of course, they were, thatched eighteenth century buildings don’t appear overnight.

At least some of the houses must be occupied by people who would have been there when our car would have passed their doors; at least some of the people must remember those who lived and worked in this place; but there is no reason whatsoever why they would have any recall of a quiet kid who they had never seen. It seems strange to be from a place but somehow not of it.

Spots of rain began to fall and the light made photographs difficult; it was time to turn for home.

At the top of the hill, a white-bibbed marmalade cat sat and looked imperiously as I passed, as if I were a trespasser in places and times not my own.

Turning into the road which had been home during those childhood years, children cycled by in the fading light, laughing as they rode along, there are some things that do not change.