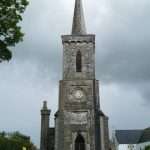 Approaching the Co Laois village of Ballinakill at seven o’clock, from deep in the recesses of the mind came a suggestion that there might be an evening service at the church on the village’s main street. Stopping at the church gates, the noticeboard advised I had arrived three weeks early – a pity, when I reach retirement, if there is not an early Communion service, evening prayer will be the service of choice.

Evening Prayer would have been nice: a big countryman standing at the door handing out Books of Common Prayer and hymn books, a handful of people in the congregation, an organist playing familiar tunes, a clergyman reflecting on the texts read as the lessons of the day. There was always something special about church on Sunday evening; it was a gathering of enthusiasts, connoisseurs; it was without busyness and noise; it was unhurried, tranquil, reassuring.

The language of Evening Prayer, the Cranmerian cadences, the images evoked by the Songs of the Blessed Virgin Mary and of Simeon, the prose of the collects, has the capacity to lift one above the ordinariness of daily existence. The sense of continuity, of oneness with the preceding generations, of the communion of saints, has a power far more profound than the ersatz rock music and banal lyrics of the future Anglicanism proffered to us by those in the ascendancy in our church.

It is hard now to imagine the revolutionary nature of the Book of Common Prayer, of how putting worship into the hands of the ordinary people was a fundamental challenge to the hierarchy and the control of the church. The democratic revolution, represented by services accessible to anyone who picked up and opened the book, is now being reversed in the onward progress of  congregational ‘leaders’ armed with media projectors who shape and control worship in their churches, who regard their own utterances as preferable to prose that has stood the test of centuries.

What is odd is that the supposed future of our church has singularly failed to succeed beyond the suburbs. It has not brought in people by the thousand; it has not even filled most of the the places where it has been established. The next evening service in Ballinakill may not be until the end of the month, but it does take place, just as the regular services in the churches across the county continue in their regular sequence. The prophets of doom, who told us in the 1980s that the old ways would disappear, made the wrong call. The Prayer Book will still be with us when the last media projector is turned off.