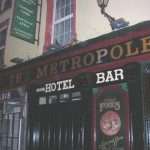 Contrary to personal inclination, there is a demand that I should go out of the house this evening.  New Year’s Eve seems odd.  Thirty-two years ago tonight, I took it in deadly earnest.

“Happy new year” greetings were exchanged with all and sundry and the the crowd dispersed, and we all went home. It seemed the most pointless thing I had done in my life, and by the age of twenty I was skilled at doing pointless things. I had frantically searched around, for fear that I was missing some vital ingredient, some word or action that would give the whole thing meaning, but there was nothing. Perhaps I had drunk very little anyway (and drink even less now), but I remember trudging London streets coldly sober, thinking I could have been at home and comfortable.

New year has seemed odd since then, what is there to celebrate in having a new calendar?

A happy calendar change to all and sundry (especially sundry).