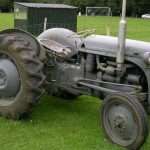 The advertisements appeared one above the other in the ‘lonely hearts’ page of the weekly farming newspaper.

A string of questions came to mind. The first, and most obvious, was how either gentleman thought that they might make contact with the desired lady through the pages of an agricultural journal, that question was followed by a succession of others.

Why a Thai or a Filipino? It can hardly be that either man has travelled to the country concerned, presumably they have heard stories of so-called ‘mail order brides’. Maybe there assistance from someone else in the writing of the second advertisement, it would be unusual for an Irish person to write ‘Pilipino’, and why someone ‘local’, has he his eye on someone working in a particular place?

If they have been unsuccessful in finding love among women in their own country, are they likely to be more successful with someone from a distant place and different culture? What stereotypes are there that would suggest a young woman from the Far East would wish to come and live on a farm in rural Ireland?

If a young woman was inclined to accept such an offer, to sort of place might she come? Bachelor farmhouses might not always be the most comfortable of residences.

Perhaps the advertisements will meet with success, perhaps someone from one of the various marriage agencies will spot them and facilitate the necessary introductions. Perhaps the bigger question that arises is how much is there that is hidden in rural Ireland?

The gentlemen concerned are probably conventional in every way. They probably go to Mass on a Sunday morning every week. They probably go to the mart on a weeknight, even if not buying or selling, it is their opportunity to meet friends and to hear the local news. They probably attend every wake, removal and funeral in townlands round about. They probably give greater care to their livestock, and certainly spend far more, than they would ever devote to themselves. In such conventionality, there is a deep loneliness. They are probably the epitome of all that is traditional and conservative, and yet, within, there is a deep wish for something thoroughly different from the daily routine of decades.

Longing for a relationship that might allow one to transcend the sheer frustration and bloodiness of life seems an emotion not confined to the pages of William Trevor or John McGahern, that such a longing might be expressed in the small ads suggests it is a feeling very deep. Interestingly, neither advertisement mentions marriage, perhaps there are conclusions one might draw from its omission.

Might the person ahead at the checkout in the supermarket, or at the pump in the filling station, or in the queue at the bank, or in the next pew at church be also searching for something with a degree of intensity similar to that of the two farmers? How much is hidden?