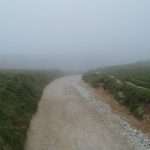 Conversation after church turned, as it has on most Sundays recently, to the desperate shortage of fodder for livestock, a situation now so extreme in some places that supplies are being imported from Northern France. Perhaps the time has come to think the unthinkable.

‘What if’, I asked, ‘what if this summer is as bad as last? What plans are being made?’

It seemed a thought that could not be contemplated. Unless there is a reasonable summer, then it will be the end for many farms, the debts are now so big.

What happened to the years we used to know? They weren’t as good as our memory recalls, but one septuagenarian farmer last year declared he could not remember a summer when it had been possible to make no hay.

In teenage years, when daily statistics mattered, the weather column in the ‘Daily Mail’ provided material for daily consumption. One summer’s day in the 1970s, it made disconcerting reading – somewhere called Tummel Bridge on Scotland had recorded an overnight low of minus four degrees centigrade. Cold summers were the stuff of nightmares.

The nightmare never materialised – the years became warmer and we were told that this was the future. There were suggestions that there would be a Mediterranean climate, even advice that we would need drought resistant plants.

No-one seemed to have told the weather itself that this is how it was expected to be. The years have become progressively colder and wetter. Reports of erratic weather patterns around the world point to climate change, but change can mean cooling as well as warming. Since schooldays, there has been the nagging thought implanted by the geography teacher that if the Gulf Stream shifted we would have a climate comparable to that of Labrador on the east coast of Canada. What if the disruption of climate patterns leads to progressively colder weather? What if this year the Azores High again fails to form and again fails to push the jetstream northward? What if the warm and dry weather from the Continent again fails to reach us? And what if that is the start of a pattern that is repeated?

Already a bankrupt nation, the loss of agriculture would turn the country into a wasteland. What contingency plans are there for another bad summer? Surely, someone has made plans?