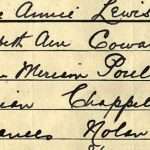 Last Christmas Day, the BBC television drama ‘Call the Midwife’, focusing upon a woman in a workhouse whose children were taken from her, pointed to the likely upbringing of my own grandfather. My grandfather was born at Isleworth Infirmary, part of Brentford Workhouse on 2nd November 1906. My great grandmother was Ellen Poulton, a machinist from Chiswick, and immediately disappears from view. No father’s name appears on the birth certificate.

‘Call the Midwife’ suggested that it was common for children in such circumstances to be sent to foster homes or given for adoption. It accorded with the tradition in our family that my grandfather had been raised by foster parents, a tradition supported by photographs of him as a young man elegantly dressed and living in comfortable surroundings. His being raised by foster parents would explain his complete absence from the 1911 Census records; a census enumerator would simply have assumed the four year old Sidney was a member of the family with whom he was living.

But what of his mother Ellen? None of the Ellen Poultons appearing in the 1911 Census seemed a likely candidate to be my great grandmother. Systematic checking of the details seemed one by one to eliminate all the women of the name. Months of pondering her likely experiences, months of considering the dreadful ‘workhouse howl’ said to have been cried by those whose lives had been reduced to utter despair, prompted a further search of the Census.

Typing ‘Poulton’, ‘1911’, and ‘workhouse’ into the ‘search’ boxes brought an unexpected result. Wandsworth Union Workhouse Infirmary had, among its 455 residents an ‘Ella Marion Poulton’, 23 years old and single, her occupation is given as ‘none’ and her place of birth as Chatham in Kent. Upon checking the image of the original document, it became apparent that there had been an error in transcription. The name recorded as ‘Ella’ had an additional character at the end; comparisons with other names on the form suggested it was an ‘n’. This woman was not ‘Ella’, she was ‘Ellen’ and the name recorded as ‘Marion’ appears more likely to be ‘Miriam’. We have record of an ‘Ellen Miriam Poolton’ who died at the age of 24 in Balham in London in 1912, who appears in the 1901 Census under the name of ‘Poolton’, but who is entirely absent from the 1911 Census – this seems to be the Ellen Miriam Poulton of the 1911 Census and seems to be my great grandmother.

Conan Doyle’s famous detective once suggested that once one had eliminated all other possibilities, what remained must be the truth. Eliminating the other Ellens leaves this young woman; five years on from the birth of my grandfather, back in the workhouse and, given her death the following year, perhaps already suffering failing health.

In that Christmas edition ‘Call the Midwife’, Rosie, the mother whose children were taken from her in the workhouse, is taken to the unmarked graves of her children, all of whom had died. Perhaps somewhere in south London there is the grave of Ellen Poulton, whose son was taken from her in the workhouse – it would be good to discover such a place.