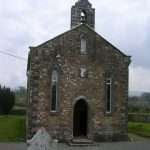 There’s an old Jewish story about searching for treasure in in order to find contentment of heart.

The story is told of Isaac the son of Jacob, a Jewish rabbi living near the Polish city of Cracow many years ago.

The captain of the guard roared with laughter, “Treasure under the bridge indeed. You silly old man, are you not old enough not to believe in dreams? I myself had a dream last week. I dreamt there was treasure buried in the house of a rabbi called Isaac the son of Jacob. What would you make of that dream, old man?”

“Where your treasure is, there your heart will be also”, says Jesus. He is saying that the things that matter in our hearts are the things we spend our money on. When we find true treasure, we will find our heart’s content.

We live our lives like Isaac the son of Jacob, always looking for that treasure, always feeling there is something to be found.

How often we are like Isaac the son of Jacob, dreaming of something more than what we have. When we are asked what it is we most want we talk about things like happiness, contentment, peace of mind, and similar thoughts.

Where is our true treasure?

The point of being a Christian is that we do not need to search, we do not need to be constantly spending in the hope of finding something. The greatest hope, the most precious treasure, is at home, it is within us. Everlasting life – here and now, what more can we possibly want?

During Adolf Hitler’s reign of terror across Europe, there was a systematic attempt by the Nazis to exterminate the entire Jewish population. One Jewish family found refuge with a non-Jewish friend who hid them in the attic of his house. Eventually the man’s friends discovered that he was hiding the Jewish family. They were sympathetic but they warned him that he was putting his life in danger. “I am here”, he said, “and the time is now”.

In those few words that German expressed a truth about life that most people never come to realise. Centuries earlier the mediaeval mystic Meister Eckhart had expressed the same thoughts, the only life I have is this one, the only time I have is now.

“Where your treasure is, there your heart will be also”, says Jesus. Sometimes we have to ask ourselves what it is we seek. What happiness do we hope to buy? We can spend years wishing for a past that will never return or looking forward to a future that never comes.

We have this one life, this one opportunity, we pass this way but once. We are here and the time is now.

“Where your treasure is, there your heart will be also”. If we have our heart in the right place, then true treasure will be found.