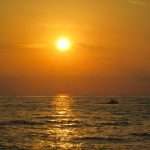 A schoolmaster would probably have dismissed such a hope as evidence of “a lack of ambition”. In my late-twenties, an aspiration developed to become a writer of bad novels, making just enough to get by. The meagre living would enable the purchase of a small stone cottage deep in southern France, a place within walking distance of a village which had a bread shop and a cafe. The sea would not be too distant, though the area would not be so popular that the roads became congested in the summer months.

The aspiration was detailed to the point of envisaging driving a dusty silver-coloured Peugeot, a car that would have seen better days with wires hanging from below the dashboard. It wouldn’t be a car that one would take on a long journey, but what need would there be of driving long distances when everything one might desire was nearby?

The only flaw in the plan was the inability to write; even a bad novel was a book too far. Attempts at short stories disappeared without trace when entered in competitions. Writing the sort of fiction that people might buy really is an extraordinary talent; bad novels require considerably more ability than anticipated. Without the freedom a writer’s life might have offered, a life deep in France never became a possibility, though one can still dream.

Packing bags for a return journey to Ireland, the 550 mile drive to Cherbourg brings home the distance south we have travelled; this the far south, and it is a good place to be.

It is 25th September and the temperature was 32 degrees Celsius; the sun shone and the air had the feeling of high summer; summers here last six months. The weather changes the way in which people live. Doors and windows are open; meals are eaten outdoors; people sit at pavement tables and sip the local produce. Even sporting events are different in such a climate, a festive air pervades among shirt-sleeved spectators; no raincoats and shoulders hunched against the wind. The climate affects the standard of living, energy bills are a fraction of what they are in norther climes, even clothing expenditure is far less

Communities are vibrant. The local government system, that has elected mayors right down at the level of the communes, gives everyone a sense of direct accountability and an active interest in community affairs; bureaucratic, it might be, but no-one can say they have no voice. Shops are filled with people who go to buy fresh produce every day. The diversity of the produce causes one to stop and ponder fruit that looks unlike anything one might encounter at home. If eating is a serious business, then buying food to cook is a matter of utmost gravity, not something to be done hastily or without careful thought. Standing in the supermarket queue listening to a young mother chat in English to her child and then laugh and chat in fluent French to the lady behind makes one aware of expatriates living in the area.

The schoolmaster would have said, “there you are, dreaming again”. Of course, he would have been right. It is twenty-five years since I first came to this place. In fifteen years time, I won’t need to try to write, I won’t even need to drive an old Peugeot – though might do so, for sentimental reasons.