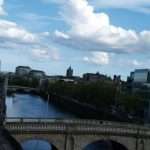 A wet day during the holidays last month meant an opportunity to watch Compton McKenzie’s film Whisky Galore. I was perhaps eight years old when I first saw it, televised on a Sunday afternoon. The gentle comedy, filmed in 1949, was set in the Western Isles of Scotland. The story is set in the war years, a war that has brought a grave shortage of whisky for the islanders. A freighter runs aground, bringing thousands of bottles of whisky to the small community. It created an impression in a young mind that isolation was something idyllic.

It was an impression reinforced by the 1983 film Local Hero. Plans to bring industry and change to a remote Scottish coastal community are blocked by the man who owns the beach; the American industrialist behind the plans comes to the beach himself and discovers a place of tranquility and beauty. In the 1990s, the perception received further strengthening through reading the children’s stories of Katie Morag to a little girl. Life in remote and isolated spots was something to be desired. Such rural communities were full of warm and engaging country people along with refugees from city life who realized the superiority of simple things, and eccentric characters who painted or wrote books.

It never occurred to question the received wisdom, that the good life was to be found in the most remote places, until travelling through Manila on a September Sunday evening in 2001.

Flying into the vast metropolis on a domestic flight, a Catholic bishop offered us a lift to a hotel in Quezon City. Manila was buzzing with activity, as it always was. The bishop’s driver negotiated the traffic with infinite patience.

Underneath a flyover that carried a major road, there were families camped under shelters made for cardboard and tin.

“Bishop, where do these people come from?”

“They come from the country and they stay in places like this until they find something better”.

“But why come to the city to live such a life?”

“Because in the city there are services and there is a chance of work”.

“But what services have they living under a bridge?”

“They haven’t less here than they would have in the country”.

It was baffling, how could living under a bridge be better? The people obviously believed it was better to be here than the places they had left.

Since that Sunday evening drive in 2001, the question of why people move to the city has arisen frequently. As Dublin expanded through the years of the economic boom, many people would have wondered at the numbers of people coming to live in the vast housing estates that daily spread further and further westwards. What was it that made tens of thousands of people want to come and fill these houses?

Whatever the attractions of rural isolation, there was a huge vote with the feet for city life. It was about more than jobs. Even when the government pursued its decentralisation programme, offering jobs in towns around the country, only a minority availed of the packages – Dublin’s pulling power was far greater than that of the provinces.

Whisky Galore made a good story, practical living for most people demands much more prosaic places.