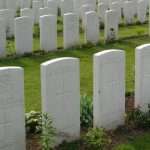 My great grandfather, Private Charles Pinder Bennett of the 6th Battalion Somerset Light Infantry was a casualty in Flanders on 21st October 1917. His records say he received gunshot wounds to the “face, abdomen and thigh”. He was taken to a military hospital at Le Treport and then to the hospital at Rouen. He was lucky, he survived and served out the war a member of the Labour Corps, being assessed as unfit to return to the trenches. He might have been among those who died on the front line, or at a casualty clearing station, or at a field hospital; he might have been eviscerated by an artillery shell, or disappeared without trace in a vast pool of mud. He might have joined the ranks of the variously recorded dead.

Walk the cemeteries of the Western Front and the nuanced inscriptions of the gravestones convey the reality of the deaths experienced.

Writing in yesterday’s edition of the English newspaper The Independent, Robert Fisk says:

In their neat lines with their fresh roses, it’s easy to believe that beneath these graves lay the perfect skeletons of those “glorious dead” whose identities were, somehow, mislaid. Alas, beneath these particular headstones, there are sometimes just bits of human beings, torsos without heads, legs and heads without bodies, mere scraps of bones.

But isn’t this the very truth declared by the inscriptions?

It was at the Somme in July that the realisation struck home that one could be dead in various ways. Accustomed to encountering graves of unknown soldiers while walking through the Commonwealth war cemeteries of Picardy and Flanders, a request from a friend for a photograph of a stone marking the grave of “An Irish Soldier of the Great War” prompted a search for nuances of the unknown.

Some unknowns were specific, the stone stated that the grave was of a soldier, a sergeant, a lieutenant of a particular regiment, even among the ranks of the officers it being not always possible to determine which gathering of human remains had once been which officer.

“What does this mean?”

Ian Gumm, our guide, had explained. There had been insufficient clues as to the men’s identity to give them names or ranks or even regiments, but it must have been that the shreds of uniform still attached to whatever body parts had remained had shown the men had served among the soldiers from particular countries.

The explanation brought home the horror of what the inscription, “A Soldier of the Great War” really meant. There was not sufficient found to determine even what country this man had left to die in this hell. Sebastian Faulks’ captures a sense of its meaning in lines from his novel Charlotte Grey. Levade, a Jew in Nazi-occupied France talks about the cemeteries from the Great War:

On the tombs of the English soldiers, the ones too fragmented to have a name, I remember that they wrote ‘Known unto God’. By this they meant that here was a man, who did once have arms and legs and a father and a mother, but they could not find all the parts of him – least of all his name.

“A Soldier of the Great War” meant so little was found that what remained could no longer be identified with even a nation.

The inscription “A Soldier of the Great War” expresses the bloody obscenity of the war to end all wars; in the sparseness of its words it conveys unimaginable horror. Would anyone believe, as Robert Fisk says, that a “perfect skeleton” lay beneath?

Having survived the trenches, Charlie Bennett died as a consequence of enemy bombing in London in 1944.