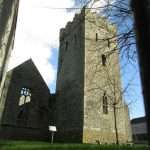 Visiting the little Co Kilkenny town of Callan in the pale sunlight of a wintry day, there was a momentary sadness looking at the building that had once been the place of worship for the local Church of Ireland community. Closed almost forty years ago, it is hard to imagine the congregation who once gathered there. Callan would have been a fine place to have been a clergyman, a neat town surrounded by pretty countryside.

Walking to the edge of the town, there was a stark reminder of why many of the people of Nineteenth Century Callan might have been pleased never to encounter the Church of Ireland again. The buildings of the former workhouse offer little clue to the tragedies they witnessed – some three thousand people died in them during the years of the Great Famine.

Notwithstanding the self-sacrificial work of many individual clergy, between 1800 and 1870, the Church of Ireland was part of the United Church of England and Ireland, the Established Church. In the mid-Nineteenth Century, it was at the heart of the political establishment that controlled Ireland, a political establishment that included Charles Trevelyan, Assistant Secretary at the British Treasury, the man who oversaw the distribution of relief in Ireland. While a civil servant, Trevelyan was not averse to theological statements:

Trevelyan was a layman, within the ranks of its clergy the Church of Ireland numbered the evangelist the Reverend Edward Nangle who saw the famine as divine punishment for much more specific actions:

The Government resolve to endow in a permanent form the fountain-head of Popery in Ireland — the Royal (?) College of Maynooth. The Universal Protestantism of Great Britain and Ireland revolts, and with a million and a half voices deprecates the measure. This is of no avail. The miserable minority of men in power accomplish this infatuated purpose. It is done; and in that very year, that very month, the land is smitten, the earth is blighted, famine begins, and is followed by plague, pestilence, blood! The work of encouragement to Popery proceeds ; the essentially Popish Board of Irish National Education has been doubly, trebly endowed and chartered ; the Popish priesthood are flattered, and unconstitutional, illegal titles are heaped upon the Hierarchy. A state endowment is lavishly offered to them, and, parallel with all this, pestilence grows and increases, famine spreads, civil war and rebellion stalk through Ireland.

A church that included Trevelyan and Nangle could hardly have held much appeal for those who had suffered unspeakable horrors. The church in Callan might have closed in 1976, its long term future was sealed more than a century before.