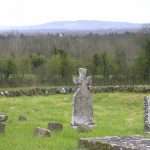 I would have doubted John McGahern. The doubt would not have been a questioning of the veracity of the accounts in his novels of 1950s Ireland; they are too detailed, too consistent, too alive with emotion, to be anything other than accurate reflections of the realities which he encountered. Doubts would have been more in the nature of wondering whether the scenes, the characters, the stories, he describes were general experiences, or whether they were, instead, cameos of Ireland at its bleakest. Stories told, of realities harsher than lines from McGahern, suggest his depiction was fair, even an understatement.

Working as an apprentice in a drapery store in a town some thirty miles from home around 1950 had not been a happy experience for the person recalling the time.

“Did you cycle back home on a Friday evening?”

“Friday? It was Saturday when the week finished; it could be ten o’clock in the evening before we were allowed to go. Two of us had to scrub the floor of the dressmaking room after the work for the week was over. If we hadn’t gone home, then, on Sunday mornings, we had to go to church. We were not allowed to attend our own church, we had to walk down the street in a line to attend the church to which the owners belonged. My sister was older than I, so was a more senior apprentice – it meant we were not allowed to sit together, I had to sit in the pew behind her”.

“And all of it for no pay”, commented a companion.

“Did you really receive no pay at all?” The question displayed an ignorance of the reality they experienced.

“Of course not, we were apprentices. We just received our food and accommodation. The accommodation was a room we shared at the top of the building; there was no hot water and the toilet was outside. It was freezing. The food was very poor”.

“What were the dinners? Bacon and cabbage?”

There was a smile.”Bacon and cabbage would have been a luxury. The treat of the week was being given sausages to sizzle on a Saturday night. Breakfast was bread and butter”.

This was not O’Casey’s Dublin, these were apprentices working for a retailer in a prosperous provincial town.

“Perhaps the shop didn’t make much money. I suppose there wasn’t much money around”.

“The shop made plenty of money, the owners lived very comfortably – they were just mean. My brother used to stand up to them at times. They had farmland as well as the shop and he and some of the other apprentices were sent out to save hay. At dinnertime, they were given food in the farmhouse. My brother noticed that he and the other Protestant boys were shown into the living room, the Catholic boys made to sit in the kitchen. He picked up his things and went to the kitchen. The boss noticed and asked him what he was doing in the kitchen – he said that he would eat with those he worked with. It didn’t make him popular ”

“But were you given jobs at the end?”

“We were not. At the end were told our apprenticeship was over and that we had to find work for ourselves. Why do you think so many of us went to England? There was nothing for us here – nothing”.

McGahern would have found plenty of material for a story.