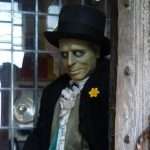 Vera will not return until 2015; no matter, there will be a chance to watch the repeats.

An essential criterion for a holiday rental in France was that it would have satellite television; not for news, not for sport, not for movies, but for ITV 3 and evening after evening of detective programmes., Foyle’s War being the favourite.

Detective stories have been part of my life since first I ever read a novel. Amongst the adventures of Captain W.E. Johns’ Biggles, there were tales of the detection of dastardly criminals. Hergé’s adventures of Tintin had exotic plots set in places far beyond the imagination of a boy in rural England. Television offered few options – there were Z Cars and Softly, Softly – Stratford Johns always got his man.

Teenage years brought Agatha Christie – reading The Mysterious Affair at Styles while in bed with mumps at the age of fourteen still looms large in the memory. (Detective fiction must have been detrimental to health, for within three months I was in bed again with severe chicken pox). The Sweeney was high in the television ratings, though car chases were more prominent than sleuthing – Regan knew his villains, it was a matter of pinning charges to them.

By the time of sixth form college, Bergerac was on the television. Detection given a suaveness by its location on the island of Jersey. Not that detective stories were something to admit to reading, the English tutors were very snooty about crime as a literary genre, it ranked in their estimation with westerns and romance.

It was dear old Morse who reopened the world of the detective stories after ten years of reading literary novels. Morse on television would be watched with the subtitles turned on so as to get the details of every piece of music; the music was vital to Morse. John Thaw was so much Morse that when he became ill, there was no option other than that the chief inspector would die. The words that Inspector Morse is dead were the saddest I read in years.

Passing years meant not needing to care in the slightest about what people thought of what I read; no-one was much bothered if I read piles of thin Inspector Maigret paperbacks instead of thick 19th century novels. Ruth Rendell’s Reg Wexford became as familiar as Morse, while her alter ego, Barbara Vine provided stories of shadow and darkness.

Poirot, an insufferable character in the past, became a comical and likeable egotist in the volume of 50 stories that sits on the bookshelf. Midsomer Murders tends to be more light entertainment than detection; if it’s real detection, then Oxford, with Endeavour and Lewis, is the place to be, though the Italians on BBC 4 provide plenty of challenge

Attempting to understand the attraction of the detectives, they seem an escape into a world where the good guys win; a piece of escapism in a world where justice is about as likely as Poirot being humble, or Morse playing pop music – or Vera dressing with elegance.