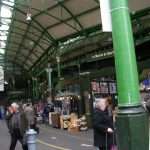 The success of the radical right in the European elections did not come from nowhere, nor did it come from a sudden espousal of extremist views by tens of millions of people. In England, the sort of people who voted UKIP are the sort of people you would meet in the pub on a Sunday lunchtime; they are neighbours, friends, even; they are ordinary working people. Overwhelmingly, they are neither racists nor xenophobes; they are simply people with a deep sense of alienation, people who have been ignored by the decision-makers, people who feel they do not count.

It is a decade since The Likes of Us: a Biography of the White Working Class was published. The author, Michael Collins traced the the stories of working class people in London and their palpable sense of hurt at becoming invisible to the political establishment. Collins describes a meeting with Sloppy Joe, a white working class Londoner, in which they talked about a brochure printed to promote the borough of Southwark.

Collins’ work was ignored by the establishment, his views did not conform with the political discourse of the time, yet it explains the rise of parties ready to tap into the grievances felt by Sloppy Joe and all his friends.

The main political parties will continue in the hope that the present nastiness will go away. Continue to ignore those Collins encountered, and things are likely to become worse rather than better.