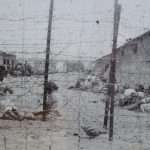 It was by chance on an evening in 2012 that I first heard about the Retirada. An Englishman in his sixties talked about Argelès-sur-Mer as a place where refugees from the Spanish Civil War were held on the beach.

Walking the seafront the following day, I discovered a memorial stone commemorating those who died. Only an Internet search, revealed the full horror of the Retirada, the flight of hundreds of thousands of  men, women and children from Spain, which by January of 1939 was under Fascist control.

France did not want the refugees and classified them as “foreign undesirables”, allowing them to be interned in compounds along the seafront. At Argelès-sur-Mer, up to a hundred thousand people were held in the woodland that adjoined the beach. No proper facilities, hardly any food, brutal treatment: thousands died between February and July 1939.

Even when the camp was dismantled, things hardly improved. Some returned to Fascist Spain, some ended up in forced labour groups; after the Nazi occupation, some were deported and were to die in extermination camps.

The memorial stone inscription is brief and to the point:

(To the memory of the 100,000 Spanish republicans, interned in the Camp of Argelès, during the RETIRADA in February 1939. Their misfortune: to have fought to defend democracy and the republic against fascism in Spain from 1936 to 1939. Free Men, remember them).

If you walked among the Argelès trees today, it would be hard to imagine the horrors of the place. Do the revellers from the seafront discotheques and bars ever have any realization that the ground on which they stood had been a place of mass suffering and death?

When the seventieth anniversary of VE Day was marked earlier this month, how many people gave a thought to the people of Eastern Europe who had little to be celebrate in 1945? Republics that had emerged after the First World War were stamped on by Stalinist invaders. How many people thought about what it might have been like to have been in Spain in 1945? The hopes of democracy at the end of the Second World War were betrayed, the dictator Franco allowed to remain thirty years more. His continuing presence a matter of convenience for Western powers.

Crossing the Medirranean border between Spain and France yesterday, a roadside parking place allowed a visit to a memorial site for all those who had fled. Each panel had photographs from those dark days in 1939.

The Spanish refugees, those who were fleeing from Fascism, were not put into camps by oppressive totalitarian regimes, they were imprisoned by a Western democratic government led by a democratic president and prime minister. A hundred metres away, on the French side of the border crossing there is still no memorial, no acknowledgement of the scenes that took place there: there should be something, something as a reminder that democracy is no guard against being an oppressor.