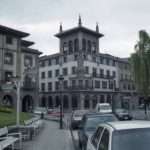 “Don’t be going and doing anything wild, now.”

“I’ve never done anything wild in my life.”

“Martin Luther probably said that before he nailed those things to the door.”

Putting down the telephone, I wondered about the comment. It might have been the height of radicalism in the Sixteenth Century, but writing theological statements and fastening them to a church door hardly seemed especially wild now. What would have been a wild thing to do?

In student days, the writing of Laurie Lee seemed to embody what it meant to do something wild. Not Cider with Rosie, but  its sequel, As I walked out one midsummer morning. Lee’s description of going to pre-Civil War Spain with no luggage other than a knapsack and a violin, and with no more than a handful of coins to spend, seemed a life beyond imagination of someone growing up deep in the rural West Country. Had I ever had the courage to go alone to a foreign land, had I ever had the courage to try to live on my wits alone, I would have fled home to England at the first sign of danger, Laurie Lee’s wildness meant that he stayed in Spain and participated in the conflict.

Memories of the Spanish Civil War were still recent in my student days: the young men who had gone off in their twenties to join the fight against Franco were still only in their sixties.  The London School of Economics was probably not typical of English colleges, and was certainly a far remove from the village in which I had grown up, reprints of the posters from the 1930s were still pinned to the walls of student rooms.  Spain seemed a place of flamboyance, of colour and vibrancy.  In the pages of Laurie Lee, it became a place where anything seemed possible, even for a youth no older than the one struggling with undergraduate essays. Sunshine and red wine are perhaps more conducive to irrational exuberance than grey dampness and flat beer.  Forty years on from losing the Spanish Civil War, those sympathetic to the losing, Republican side could still pin up posters with pride. Even in theological training the vision of Spain as being a place of verve, vivacity and reckless heroism continued.  A classmate, (who was to be murdered in his Rectory in 1990), would tell stories of his uncle Robert, a Church of Ireland cleric who had died in Spain, fighting against the Fascists.

Being long past the age when something “wild” might have been possible, I can only ponder whether in contemporary culture there is anywhere that captures the imagination in the way that Spain did in times past. 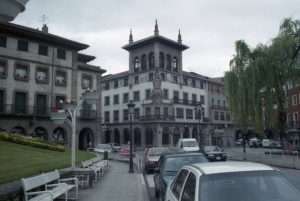