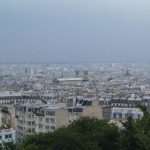 Actually, there is a lot about Paris not to love. The arrival of the baggage at Charles de Gaulle Airport took almost as long as the flight from Dublin, it caused one to wonder if a single man had not been detailed to carry the bags from the aircraft one by one. Access to the station was temporarily barred by a red and white tape while police officers investigated an unattended bag. We were sold tickets for Maisons-Laffitte without being told that the station was closed for the weekend. The journey into the city was passed between mile after mile of graffiti-covered walls. At Chatelet-Les Halles, where we might have caught a train, we were told instead to go to Saint Lazare station. At Saint Lazare, we could see no signs concerning the closure. A woman at the ticket bureau knew nothing of any line closures and told us to go up to the platforms and see if we could find a train. Finally, a young man standing at an information desk told us that we would have to catch the train to Sartrouville, the station before Maison-Laffitte and then catch a bus. The train was packed and at Sartrouville there was a crush to reach the buses. We arrived in Maisons-Laffitte at 2pm, having landed at Charles de Gaulle at 9.30 am – four and a half hours to cross Paris. Well, not even to cross Paris, rather to go from the north of Paris to the north-west of Paris. It was one of those mornings when it was hard not agree with a friend who will not go to any place that he cannot take his car.

But the bags were left at our caravan and baguettes were bought in a boulangerie, and the bus was once more braved to return to Sartrouville and the train back to the city, and the rain had stopped and the clouds had broken, and refreshment was taken at a pavement cafe, and all seemed again right with the world. Meeting our son whose flight from Dublin to Orly had been delayed by six hours, we found a little brasserie in a back street for our tea. (Two of us had l’escargots as an appetiser, though snails would not be seen by most as giving one an appetite for anything).

Paris looked beautiful in the evening sun, even the crush on the train seemed more tolerable. Perhaps “love” for Paris is too strong a word, but there are many worse places to be. 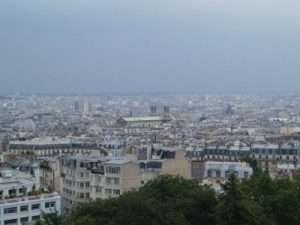