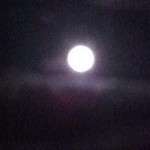 A rare family evening together, a son home from school duties, a daughter back from her hospital ward, and though none of us understand Gaelic football, we watched the replay of the All Ireland Ireland Senior Football final between Dublin and Mayo. Mayo again fell short of triumph, losing by a single point.

“Is there really a curse?”

“It is said that the last time they won the All Ireland, they were disrespectful when passing a funeral on their journey home and that a witch put a curse on Mayo, that they would never win another All Ireland Championship until all the team under the curse had died.”

It seemed an extraordinary story. No-one still believed in curses, did they? Even more extraordinary was to discover that the Mayo curse is but one among many alleged sporting curses. Wikipedia gives details of the Mayo curse, but the person responsible was said not be a witch, but a priest:

The Curse of ’51 allegedly prevents Mayo from winning the Sam Maguire Cup ever again, or at least until the death has occurred of every member of the last winning team from 1951. It remains unbroken—despite the team reaching the final on eight occasions since then, they have either completely collapsed on the day or been undone by a series of other unfortunate events.

The legend tells us that while the boisterous Mayo team were passing through Foxford on the victorious journey home, the team failed to respect a funeral ceremony. The residing priest consequently put a curse on Mayo football to never win a subsequent All-Ireland Final.

Anyone who peruses sporting records will find team’s whose fortunes have been similar to those of Mayo, look at the record of the French rugby club ASM Clermont Auvergne, one of the greatest clubs in Europe, yet a single national championship and a European record where they have always fallen just short of triumph (having been at European Cup matches where they were eliminated by Leinster by the smallest of margins in 2010 and 2012, there might have been a feeling of a jinx). No-one, though, would suggest ASM are suffering from a curse.

Whatever the circumstances of the 1951 homecoming, they had no bearing upon yesterday’s defeat. The trouble with curses, though, is that they are like conspiracy theories, they cannot be falsified. Even when Mayo do finally win, people will say that only then has the curse ended, and to argue is pointless – you cannot prove a negative.