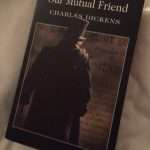 Mrs Puddicombe, our English teacher, would have urged us to read “improving” books, they would improve our vocabulary and our spelling. Of course, improving books had very dull covers, hundreds of pages of small print, and seemed to be stories in which nothing much happened. Stuff like Alistair McClean’s The Guns of Navarone was far more appealing than Victorian tomes.

Forty years after Mrs Puddicombe’s efforts, last year it seemed time to start to read the sort of books that might have been thought commendable by an English teacher. Victor Hugo’s Les Miserables, J.R.R Tolkien’s Lord of the Rings, E.M. Forster’s Room with a View, Leo Tolstoy’s War and Peace and Charlotte Brontë’s Jane Eyre were read at the sedate rate of ten pages a night. Of course, there was a degree of selectivity exercised in dodging books that were unattractive in the 1970s and seemed no more appealing forty years later.

Last week, there was a chance to go to the bookshop and choose novels that, at ten pages a night, would last until next summer. Dostoevsky seemed appealing, having read Crime and Punishment some years ago, The Idiot looked interesting. In A level days, Henry Fielding was regarded as important in the development of the English novel, so Tom Jones was taken from the shelf. Then came the confrontation with the author avoided for four decades, Charles Dickens. Dickens seemed to be responsible for the dense Victorian prose found on the school bookshelves. The storylines of Great Expectations and Oliver Twist were too familiar, Our Mutual Friend at seven hundred pages long seemed the sort of immersion in Dickens of which Mrs Puddicombe would be proud.

A week into the novel, seventy pages read, Dickens’ work is different from anything being written today. There is a precision and patience in describing every character and every scene in as full a way as possible. Perhaps readers were more patient, perhaps there was a desire to extract as much value as possible because books were not cheap,  perhaps there was a pride in being able to read Dickens’ prose.

After even the first few pages, it was not hard to see why an English teacher might suggest her class would read such a book – Dickens’ vocabulary is immense. No popular novelist writing today could consider employing an array of words comparable with that encountered in Our Mutual Friend, they would be accused of pomposity or pretentiousness. What is thought provoking is that Dickens wrote in times when levels of literacy were far below what they are now alleged to be, why is his prose so challenging? Were literate people in Dickens’ times considerably more literate than we are, or have we become so accustomed to enjoying what those who inhabited his pages would have regarded as the privilege of literacy, that we have become lazy in the way we use it? 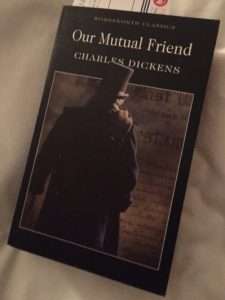