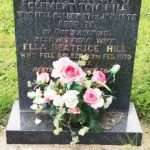 “Stream Farm,” a signpost announces the presence of the former home of Aunt Ella and Uncle Clem. Uncle Clem was truly avuncular, an uncle who understood that small boys enjoyed mischief. With laughter, he would open the door of the privy at the bottom of the garden that revealed the thunderbox within. It must have been some years since the earth closet had been used for there is no sense of smell associated with its recall, and smell is the sense most connected with memory.

No-one ever talked about his war service; no-one ever spoke about what had happened on the Western Front for him to carry injuries that affected him for the rest of his life. Perhaps there were so many war wounded, anyway; perhaps the memories of the Second World War were still so raw that no-one wanted to talk about the Great War that had preceded it. Perhaps Uncle Clem’s story did not compete with that of Uncle Jack, his brother-in-law. Uncle Jack had been captured when he was sixteen years of age and had been considered missing presumed dead;he had been sent to Poland as forced labour and had not returned until a year after the war, when hopes for him were fading. Uncle Clem’s tale of being wounded in an artillery barrage probably seemed to him as a dull tale compared to the stories told of Uncle Jack as a prisoner of war. It is odd to think that the gentle and quiet man who would sit at Aunt Ella’s tea table and chat with a small boy once had to don a uniform and march off to the futile slaughter of France and Flanders.

The tiny village in which Uncle Clem farmed, and where he and Aunt Ella had their home, is still a place apart. Take the modern cars from the driveways and remove the electric and telephone wires, and there would be much that Uncle Clem would recognize from his boyhood days. While the village school is long closed, it is a striking stone building and serves as the parish hall; remove the noticeboard outside and a young Clem Hill would have not hesitated to regard it as the school. Inside the church, the list of rectors of the parish of Pitney Lortie goes back eight centuries, one life’s span was only a small fraction of the time. The one thing that will definitely have long ago disappeared is the thunderbox. 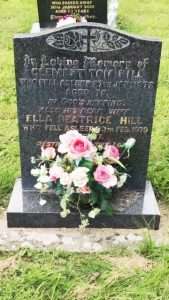