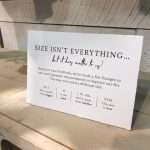 Instagram has prompted greater selectivity: whereas an entire album might have been added to Facebook, a single image is now chosen for Instagram. Since 2009, more than five thousand images were uploaded to my Facebook account; at one point more than a thousand pictures a year were being put into its albums.

A digital camera and then an iPhone made possible an inclination to take pictures of the commonplace, an inclination that was strange and costly in the days of rolls of film that had to be developed and printed. Taking pictures of ordinary, everyday things was something to generally be avoided when the processing cost a lot of money, though looking back through pictures taken in the 1980s, there was still some pretty odd stuff among the holiday and the domestic snaps, signposts and gates being common.

Ulster maritime historian Michael McCaughan was a good friend and a brilliant amateur photographer. He always said that if he couldn’t spend time taking photographs, the thing he wanted to do most in the world was to be a maritime historian. Michael could take the most dull and ordinary of scenes and find interest and texture and colour, causing one to pause and contemplate images that would not ordinarily register their presence, let alone prompt a second glance.

There are moments when a picture will prompt a negative reaction, “why did you take a picture of a sign?” But perhaps the sign has a story to tell, perhaps it is a comment on the way things are.

A more logical step would be to label the garments with measurements in inches or centimetres, which are uniform wherever they are applied, but that would not allow for differences in size classification by different chains. It would be hard to imagine that such idiosyncrasies are not deliberate, that there is something calculated in the diversity. Presumably, familiarity with the particular peculiarities of size in a particular store helps create a sense that one knows what one is getting when one buys a garment, perhaps the sign is advice about size classification, perhaps it is about the building of brand loyalty.

Perhaps the sign is a sign of corporate strategy in times when companies will attempt anything to gain an advantage. Maybe it’s worth a random picture. 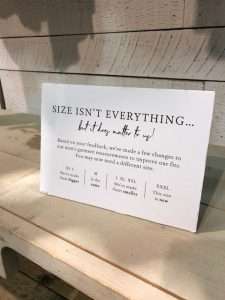