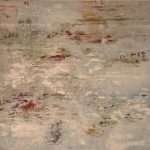 A jumble of images crowd into the mind, a windswept beach with clouds tumbling across the sky, a headland with tufts of grass and clumps of fuchsia; a pond, the surface of which is coloured by lilies and by reflections of the sky above. The blind is at once blue and grey and changes with the light from within and without. Looking beyond the blind to the river beyond, the January skies constantly change its appearance, the movement of the water adding patterns that are never repeated. An Impressionist painter might have found inspiration in the juncture of land and sky and river and sea, in the interplay of light and darkness and solidity and transience.

The pondering of patterns evokes childhood imaginings when the print of the wallpaper or the weave of curtains could shape themselves into dragons or beasts of the night, but might just as easily become horses or the animals of everyday farm life. There was a capacity for imagination in those years that faded with the advent of maturity.

Are there not countless people who had such thoughts, or similar ones as children? There was a capacity to create the extraordinary, the unreal, from the things of ordinary reality. Thought, and a viewing of things through half-closed eyes, could transform the world around into something magical.

Dragons and horses inhabiting the wallpaper and the curtains belonged to a world that was a magical place where reality had not yet crushed the power of imagination, where strange and unusual beasts might be found in the bedroom of a small boy. Anything is possible in the realms of the imagination; the unexpected, the unlikely, the absurd, they are all acceptable.

Visiting the Tate at Saint Ives there is a reminder that artists have a capacity to stir again the power of imagination. Staring at Portmmeor Beach, a beach visited on a family holiday forty-five years ago, and not visited since, there is a mingling of memories from childhood years with a jumbled recall of many galleries visited in the intervening years. The painters who sought colour and light in Brittany would have enjoyed the Cornish landscapes. The work of the abstract artists who gathered in Cornwall were a reminder of the capacity of the mind to go beyond the perceived reality, the images conjure a spectrum of moods and recollections.

Colours on a blind come as a reminder of a childhood capacity for for unreality, for being able to see things that were not there 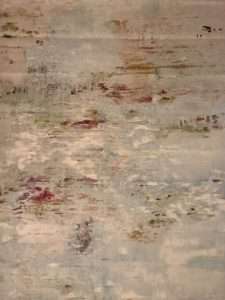