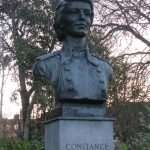 No history is ever objective, it is always told from the perspective of the teller. Sometimes, the passing years allow for those presenting a story from different viewpoints to discuss their respective narratives and to reach a greater degree of common ground. Sometimes, there is a revisionism that re-presents the past to correspond to a retrojected narrative, to tell the story so it is in accordance with current political stances. Often revisionism is a retelling of the story so that it reinforces the position of those who are dominant, significant moments are appropriated by powerful people.

Those who followed the Northern Ireland Peace Process will recall Tony Blair trying to steal the narrative for himself, standing in Belfast on Good Friday 1998 talking about “the hand of history,” when he had been prime minister for less than a year and when the Peace Process had been a long and arduous path for politicians like David Trimble, who was to pay with his political career. Such unashamed attempts at revisionism are less common than the tendency for people from particular social backgrounds to see those like themselves as the significant players in change.

The coverage of the centenary of the 1918 Representation of the People Act, marking the granting of the vote to women over thirty years of age who met property qualifications, and to five million working class men over the age of 21 who had enjoyed no previous right to vote has tended to focus upon the suffragists versus the suffragettes; the constitutionalists versus the militants; the pacifists versus the militarists. A polemicist might suggest that the final outcome was due to neither group, but due to the mass mobilisation of working-class women in the war effort.

Women in the munitions factories, women doing the jobs men had done, women sustaining the war effort, were inescapable facts. Politicians might have (absurdly) disagreed with the arguments of the suffragists and the suffragettes, what they could not deny was that the country’s war effort had depended on working women. Opposing women’s suffrage would have been a denial of the people who had sustained Britain. There was a fear on the part of George Cave, the Conservative Home Secretary, that a refusal would exacerbate class tensions:

War by all classes of our countrymen has brought us nearer together, has opened men’s eyes, and removed misunderstandings on all sides. It has made it, I think, impossible that ever again, at all events in the lifetime of the present generation, there should be a revival of the old class feeling which was responsible for so much, and, among other things, for the exclusion for a period, of so many of our population from the class of electors. I think I need say no more to justify this extension of the franchise

The Act was introduced by a politician who explicitly acknowledged that there was a social class dimension and who was anxious that working class sentiment should not be alienated, yet in the decades that followed, and certainly by the time of the schoolbooks in the 1970s, the narrative came to be centred upon the suffragettes and how effective or otherwise their methods had been. Working-class women had not the influence to shape the narrative; their overwhelming contribution often merited no more than a sentence noting the presence of women in the factories and how politicians would have acknowledged this.

So it is, in 2018, the political establishment finds it more congenial to attribute change to middle class individuals than to the working-class mobilisation feared by George Cave. Among the ironies of 1918 was that working-class women, aged over thirty, women who mobilised to support the country through an awful war, would have to wait another ten years to enjoy equality with more affluent counterparts. 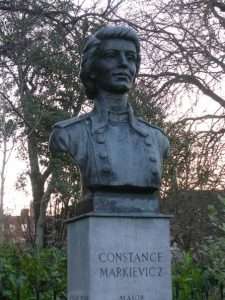