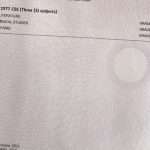 The application process for aspiring new school teachers is nothing if not thorough. Possessing qualifications from four different universities was not a sufficient ground for not having to satisfy the admissions office that I had the necessary basic qualifications in English, mathematics and science. The problem lay in locating a certificate stating that I had passed the requisite examinations. The original copy had probably been sent to an admissions office somewhere forty years ago, for although school reports back to primary school days were in plentiful supply, there was no sign of the CSE certificate. The examinations board was long defunct and application, together with a £48 fee, had to be made to one of the new boards.

Yesterday, certificates for examinations taken in 1976 and 1977 arrived in the post, now they must be scanned and the scans emailed to the university. The 1976 certificate showed the subjects required for teacher training had been passed; the 1977 certificate was evidence of laziness.

The school was a special one for asthmatics and others with poor health – 80 boys in a remote spot on Dartmoor. There were meant to be seven classes – Class 1, 2 and 3, Class 4B and 4A and Class 5B and 5A, but 4A, 5A and 5B were all in one classroom. Arriving in the autumn of 1974, instead of being put into Class 3, where I should have been by age, I was put into 4A. Arriving after everyone else, I was assigned a desk beside a very quiet boy at the back. At the end of the 4A year, the boy beside me left. I moved into the desk he had occupied and positioned myself against the window, where I remained for two years, until the summer of 1977. The teacher would smile benignly, reasoning, I think, that I was a better option at the back than some of my classmates, and providing the opportunity to spend time doing very little.

At the beginning of the 1976-1977 academic year, the teacher acknowledged that I had taken examinations in advance and told me to adjust my timetable so as to attend the classes that were necessary. Her benign approach allowed attendance at classes that were interesting and the complete avoidance of particular teachers. The year had well progressed before she realised that PE was one of the subjects I had decided was unnecessary and the instruction that I might join the rest of the class at the gym was said with a smile.

In retrospect, the year was a piece of teenage silliness. There were three CSE examinations at the end, all there was to show for time that might have been spent in a positive and fruitful way. Apart from reading the novels of Leon Uris, it is hard now to recall how the days were passed. There has been much time wasted in the four decades since, but it is the only year for which there is documentary evidence that a lot more could have been done; the certificate is mostly empty space. It is not even as though good time was wasted having good times. 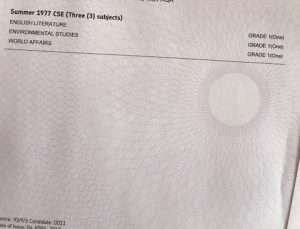