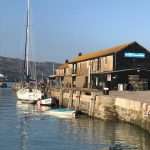 The first warm day of the year and an evening drive to Lyme Regis. Walking along the Cobb, it is hard to imagine that it is nearly forty years since Meryl Streep stood, cloaked in black, at the end of the harbour wall as the film adaptation of The French Lieutenant’s Woman was filmed.

Lyme Regis lies deep in the memory. I was eight in 1969 when I first remember being there. It was a wet day in August, an uncle and aunt took me out for the day. Wrapped up against the wind and the rain we walked the Cobb and visited the aquarium and sat in the car park and ate Cornish pasties.

Lyme Regis was always a place apart when I was young. It is only an evening’s drive from our house, but to me it was a different world. Visits were confined to day trips until 1971, our first family holiday. We rented a caravan for the week, it cost us £15. I don’t remember really doing very much during that holiday. There were lots of walks down around the harbour; watching the solitary trawler coming in each evening; and I read a book called The Otterbury Incident.

I was almost a teenager in September 1973 when we moved upmarket and rented a chalet close to the bowling green for a week. It was £20, a big hike from the £15 paid for a caravan. It had full en suite facilities and was much closer to the town. I remember the precise location because we had a dog that was unruly in its behaviour, which was fine at home, but it escaped from our clutches and did a few circuits of the snooker table-like surface of the bowling green before being recaptured. Memories of that week remain vivid. James Bond’s Live and Let Die was on at the cinema – I still think of Lyme Regis when I see the scene with the double-decker bus going under the low bridge. The pocket money ran to a couple of trips out on the mackerel boats, trolling for whatever one could catch with hand lines. Was it 25p for a 45 minute trip in those days? Most of the holiday was spent doing simple things. I fished with a friend in the harbour, using limpets on lines to catch crabs that we threw back into the water and casting spinners into deeper water in the hope of something bigger. I was allowed to go to the amusement arcade each day, but only as long as my pennies lasted. There was a horse racing game in the arcade on which you could bet pennies; it was mechanical and not very sophisticated, even a young boy could work out how often particular horses won and prolong his stay in the arcade until mid-morning. There was even a moment, that I have never had a chance to repeat anywhere, of playing a few ends of bowls at the green. The man in charge closely inspected our shoes to ensure that our rubber-soled basketball boots would have no detrimental effect upon his turf.

Lyme Regis held a place in my heart because it went with days when memories and impressions and life itself was much more vivid. But that one cinematic scene, Meryl Streep, cloaked in black, standing at the end of the Cobb, added a touch of magic to the place, implanting the harbour scene so clearly in the mind that she was almost visible in the spring sunshine. 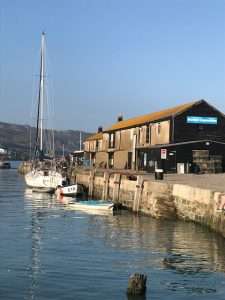