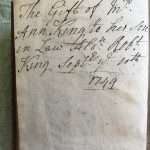 On the title page is written, “Bought by Ann King” and “R.K. 1726.” Who was Ann King and who had felt it necessary to note that she was the buyer of the book? Had R.K. written the words? One would hardly note oneself as the purchaser, particularly on the title page of a prayer book.

On the blank leaf preceding the title page, words presumably written by Ann King herself note that the book was

“The Honourable Robert King” seemed a name amenable to an Internet search, and immediately there appeared an Honourable Robert King who had come from a titled family in Co Roscommon. He seemed a strong candidate to have been recipient of the book, were it not for the fact that he had died unmarried. Searches through the genealogy of the King family of Roscommon brought no other person likely to have been the Honourable Robert King, son in law of Mrs Ann King. Sharing the surname of his in laws, Robert King seems likely to have married a cousin, a common enough occurrence in the Eighteenth Century, but there were no such combinations in the King family tree.

Perhaps the family were not from Ireland, perhaps there were two Honourable Robert Kings and one lived in England, England because the Scots would not have been using the Book of Common Prayer.

Another blank leaf at the front of the book notes three births, four decades after Ann King had given the book to her son in law, it had become the property of a member of the Strong family. The births noted are:

“John Kennedy Strong” seemed the name most likely to offer Internet search results that might suggest the identity of the family.  Google offered a John Kennedy Strong in the parish records of Powerscourt in Co Wicklow. Among the deaths is noted,

Like the Honourable Robert King, Captain John Kennedy Strong of South King Street, Dublin seems to have died at the wrong time to have been connected with his namesake in the prayer book.

For the moment, the provenance of the book remains a mystery. Were it able to speak, perhaps it would cause confusion with its descriptions of the complexities of family relationships. 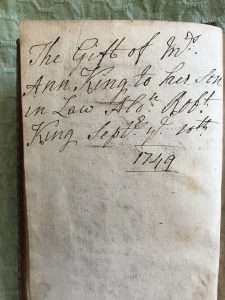