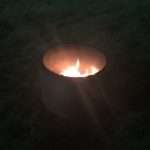 The nephews are from Belfast, but long enough in England to need to be reminded that this was the night on which the bonfires were lit.

In towns and villages across Northern Ireland the fires will be lit this evening. Some of them, 30-40 feet high, have taken months to build. BBC Northern Ireland report this evening that two of the Belfast bonfires have been removed as they posed a real and immediate danger to the homes of people living nearby. Other bonfires will necessitate a visit from the local fire brigade, a visit that may prompt stone and bottle throwing, if not worse. Youths who have drunk copious amounts of beer over the past few evenings will break out large packs of cheap lager tonight. There will be the echo of drums in some areas, rhythms intended to intimidate those who were of a different tradition. There is something visceral in the emotions generated and expressed.

And yet the nephews recalled with happiness their memories of friends gathering around a bonfire at the seaside resort where they would spend weeks each summer. I have happy memories of Eleventh nights myself.

In the little country parish where I spent seven years we would have gathered for a barbecue on the Rectory front lawn. There was a holiday mood, the following day being perhaps the only day off some of the farmers would take in the whole summer. There would have sometimes been as many as a hundred people. The older people would sit around in clusters; the children would play football and run amongst the trees. The last to leave would gather around the glowing embers of the barbecues, the last light from the charcoal illuminating their faces against the purple inkiness of the summer night sky.

They were good moments. I don’t remember words of hatred or confrontation. They would have had fundamental disagreements with each other. Some were Orangemen, some were Unionists, but amongst our numbers were others who were openly supporters of the SDLP. The district master of the Orange Order would have brought his Catholic neighbours with him; they would share drinks during the evening, some years they would have holidayed together in Donegal.

In other places it was not so benign, huge bonfires topped by Tricolours and effigies declared a visceral hatred for anything that didn’t accord with a particular definition of Protestant, a definition that had little to do with anything theological. I remember going to meet with the new Police Superintendent in one town. I was intrigued by the large-scale map of the town on one wall of her office. There were large red dots in places that seemed without great significance. Before leaving I asked her, “Do you mind if I ask what the red dots are for?”

“The Eleventh Night bonfires”, she said.

Given the disorder that surrounded them, the Eleventh Night bonfires were hardly a declaration of loyalty. Even conversations with loyalists who frequented those places marked by the superintendent’s red dots gave little insight or rational explanation as to why the hours before the annual Battle of the Boyne commemoration were observed as they were. It was hard to understand why people would want to engage in activities that caused more inconvenience and pain to their own community than to any perceived enemy. Members of the Republican community would express confusion at the Loyalist capacity to self-destruct; at the prioritisation of parading over community development.

By Friday, it will all be over, and the questions will be unanswered for another year. 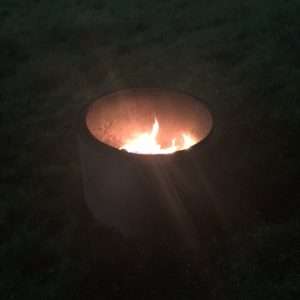