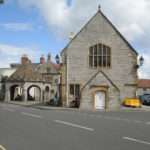 The half-term holiday brought a visit to the dentist in Somerton and a visit to an old acquaintance who lives in the town. In his eighties, he is a treasure trove of memories and stories. Always cheerful, he laughs at many of his remembrances and smiles at the thought of the approaching spring and the new growth in his garden. A former local councillor, he is well-versed in all that happens in the community.

On my way to his house, I had walked past the police station , which still has a phone on the outside wall for anyone who might go there to summon assistance, I had wondered about whether the building was still used and asked him. “It is,” he told me, “but by back room staff of some sort who have an office there. There are no patrol cars based there – not that we really need them, what would they do?”

He was right. He leaves his mobility scooter parked near his front door at night time, the charger cable being pushed in through the letter box and plugged into an electric socket – it is never touched. Incidences of crime in the local community are minimal. Medieval churches lie open all day without vandalism, electric gates and burglar alarms are rare sights in these parts. I remembered Bill Bryson writing about similar places in his book Notes from a Big Country. He described life in New Hampshire in the late 1990s:

That people leave their cars unlocked and the windows open tells you something more about the town, of course. The fact is, there is no crime here. People will casually leave a $500 bicycle propped against a tree and go off to do their shopping. If someone did steal it, I am almost certain the victim would run after the thief shouting: “Could you please return it to 32 Wilson Avenue when you’ve finished? And watch out for the third gear – it sticks.”

No one locks anything. I remember being astounded by this on my first visit, when an estate agent took me out to look at houses (and there’s another thing – estate agents in America know how to stand up and move around) and she kept leaving her car unlocked, even when we went into a restaurant for lunch and even though there was a portable phone on the seat and some shopping in the back.

At one of the houses she discovered she had brought the wrong key. “Back door’ll be unlocked,” she announced confidently, and it was. I subsequently realised that there was nothing unusual in this. We know people who go away on holiday without locking their doors, don’t know where their house key is, aren’t even sure whether they still have one.

Now you might reasonably wonder why, then, this is not a thief’s paradise. There are two reasons, I believe. First, there is no market for stolen goods here. If you sidled up to anyone in New Hampshire and said, “Wanna buy a car stereo?”, the person would look at you as if you were off your head and say, “No, I already have a car stereo.” Then they would report you to the police and – here is the second thing – the police would come and shoot you.

But, of course, the police don’t shoot people here because they don’t need to, because there is no crime. It is a rare and heart-warming example of a virtuous circle. We have grown used to this now, but when we were still new in town and I expressed wonder about it all to a woman who grew up in New York City but has lived here for 20 years, she laid a hand on my arm and said, as if imparting a great secret: “Honey, you’re not in the real world any longer. You’re in New Hampshire.”

Somerton is even better than New Hampshire. There is no need for policemen, certainly not for the sort who would shoot you. 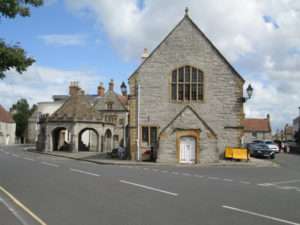