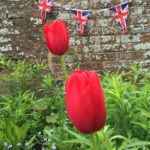 There was Union Jack bunting along the stone wall of the garden at the Hartlebury Castle May Fair. It recalled a music video from the beginning of the decade by the group Mumford and Sons. In the video, released to accompany their song Winter Winds, the four musicians step out onto a country road. One is dressed in a three piece light coloured suit with bunting draped around his neck; it is home made bunting of the sort that would have been found at village fetes in the 1950s – there are hand drawn union jacks on the triangular pennants, forerunners of the plastic flags of today. Elsewhere in the video, they are crossing a meadow filled with wild plants.

The video seemed to touch upon quintessentially English things. It presented a rural England of meadows and sunshine; a place of village greens and garden fetes and white marquees and coloured bunting, an England filled with Hartleburys. The England evoked was a place of fresh scones and Victoria sponges, and home made jam and chutney, and cucumber sandwiches without crusts, and tea served in china cups with matching saucers. One of the group in the video carries a tambourine; it conjures up memories of folk bands, and Morris dancers with bells and handkerchieves.

Maybe the England of jam and Jerusalem, of warm beer and Stilton, of willow on leather and stripy deck chairs and Panama hats, of ladies in frocks and men in sleeveless pullovers, of all those clichéd images; maybe that England was never more than a cliché, a piece of fond imagination. Is the England of May fairs the real England?

Sometimes I wonder if England is anything more than Tom Stoppard’s “conspiracy of cartographers,” a geographical occurrence, with characteristics so divergent that it is not possible to say “this is England?” Does England really exist at all?

Hartlebury Castle and the Mumford and Sons video images are probably not the real England, but which images are the real ones?

Perhaps the unease within the country owes much to the fact that people look around them and are unsure about what they see. Perhaps they look around and see something that no longer looks anything like what they once imagined their country to be. But what did they imagine? England has been in a state of constant change since the Industrial Revolution in the Eighteenth Century, writers like William Cobbett longed to recapture a bucolic past, but even that past was far from ideal.

Perhaps England is not a land of May fairs, but driving through the shires on a bank holiday Monday evening, it remains a place of beauty. 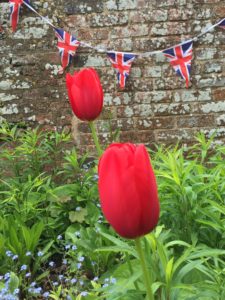