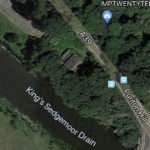 The defence of the realm must depend on some odd considerations for the Ministry of Defence to retain such an unlikely property portfolio. What strategic purpose is served by the ownership of random parcels of land with derelict buildings?

The portfolio includes a small strip of land lying between Puriton Hill and the King’s Sedgemoor Drain. Thickly wooded, It has a box-like red brick building visible from the road. The sort of building that would have been found on wartime aerodromes. The building has been abandoned for decades. Once the site must have had some significance, for adjoining the road there is a concrete pill box, the gun slurs facing out at those who would have passed up and down the road.

Perhaps, I thought, the purpose of the buildings was to defend the bridge over the King’s Sedgemoor Drain, but if every small bridge over every small river had been thus defended, the country would be filled with such remnants of wartime.

However, what is more intriguing is not the past function of the premises, but their present purposes. Regularly, a pickup truck from Securitas, the private security firm, is parked in the gateway of the site. What does the security man do when he is inside the chain link fence? What is there to check?

The buildings are more than seventy-five years old, they have been abandoned for decades, they are too crumbling to even be useful for storage, so why does this piece of land still remain MOD property? Why go to the expense of regular security checks on property that can serve no purpose?

Perhaps it is like the bridges over railways that were closed in the 1960s that continued to remain the responsibility of British Rail, even when the nearest railway might be some miles distant. Perhaps the MOD are expected to continue to be responsible for scattered sites all around the country. Yet there is a difference between a former railway bridge, that is only an encumbrance, and a piece of land less than a mile from Junction 23 of the M5 motorway and no more than two miles out of Bridgwater. The site has development potential, someone could do something with it, so why does it continue to be locked away?

Perhaps it is just that the site has been forgotten, perhaps it has for so long been on the security rounds that no-one can quite remember how it came to be on the list. The story behind it might be intriguing.