The unveiling of her statue in Grantham at the weekend has shown that even in death, Margaret Thatcher retains her capacity to polarise opinion. Never someone to whom people could be indifferent, Britain’s first female premier was either loved or hated.

As someone who grew up on tales of post-war premier Clement Attlee and NHS architect Aneurin Bevan, there seemed, to me, much to be cherished in the post-war consensus that was accepted by the Conservative governments of the 1950s and 1960s. The consensus sought a society where there would be care for everyone. It was a mood that arose from the trauma of war and the misery of the 1930s.

The English, however, (for it was they who would send Margaret Thatcher Downing Street in 1979 – she never commanded a majority in Scotland or Wales), were determined things were going to change. The new breed of Toryism was more typified by David Evans, the brash working class  MP for Welwyn Hatfield than it was by the public school and Oxbridge patricians

Margaret Thatcher was ideologically opposed to the post-war consensus, declaring to Woman’s Own magazine in 1987,

Being told to look after oneself seems reasonable to those who could do so, particularly if that self-dependence came with extra cash in one’s pocket. It was a message that struck a chord with many working class electors who had been heavily burdened by the taxation policies of the Wilson and Callaghan Labour governments; it was a message that won elections for the Conservatives in 1979 and 1987 (the Falklands War enabling Thatcher to overcome the unpopularity of 1981 and triumph in the 1983 election).

But it was also a message that absolved people of responsibility for others, it removed their responsibility to contribute to those things in society that could not be provided by the market.

Margaret Thatcher’s mistake, (like the mistake of Labour governments that allowed particular trade unions to shape government policy to favour their own members), was to underestimate self-interest.

People who looked after themselves were not inclined to look after their neighbour. The neo-liberalism of her economic policies was reflected in a laissez faire attitude to society and many people who had not the capacity to cope were abandoned.

Margaret Thatcher’s principle was that one should pay for what one wanted. It is a principle that might be applied at a societal level, one gets the sort of society for which one is prepared to pay.

Since 1979, building a consensus-based, inclusive society seems something for which Britain is not inclined to pay, that may not be to the liking of those on the Left, but that is the nature of democracy. 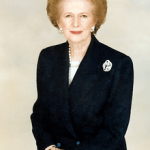