It’s now some forty years since I read the story, or imagined that I had read the story. It is too absurd a story to have been imagined, particularly by someone who had no knowledge of the situation.

The memory, real or imagined, from four decades ago is of reading a news report in late August 1982 that the Irish military were contemplating intervening if the general election anticipated for that autumn proved indecisive?

There had already been elections in June of 1981 and in February 1982 and the expected poll would have been the third time in which the country had voted in eighteen months.  The government seemed mired in controversy and the opposition certainly perceived the election campaign they were to fight in terms of a crusade, but was there really a story about the army?

In the memory, the story is printed in the Irish edition of a British Sunday paper, and I read it sitting on the grass close to the fort at Summer Cove outside of Kinsale in Co Cork.

It would seem odd to have a clear recall of a story that never existed in the first place? Why imagine a story that one’s college education would have said couldn’t have been? 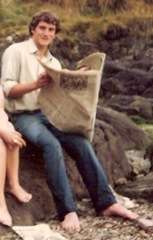 Tending to the view that the whole thing was imagined; to the conclusion  that thought of army intervention in Dublin must have arisen from the conflation of two stories, that political instability in Ireland and the threat of a coup elsewhere had become muddled. There is a photograph that causes doubt.

The photograph is taken at Summer Cove, Kinsale.  A group of friends had gone swimming and I had been thrown into the sea in my clothes; I had retreated to the shore and had sat to read a newspaper.  However, the photograph is from not 1982, but from Sunday, 6th September 1981.

Was the story in that paper?  Was the memory faulty by a year?  Were things so unstable after the June 1981 election and the hunger strikes that intervention had been rumoured?  Maybe it is too much of a story to have been imagined.