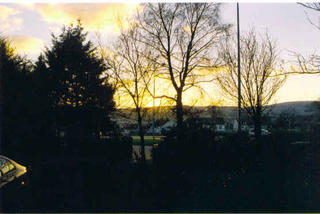 I was in Tesco’s in Ballybrack a couple of weeks ago getting some shopping on a Saturday afternoon. There were some girls at the check out doing bag packing to raise money for a local play group.

As the cashier checked out my shopping and the two young ladies packed it into my odd collection of carrier bags, they stood singing a song from the 1960s, ‘All the leaves are brown, and the skies are grey . . .’. I was disappointed when my bags were all packed. I always liked that song. The Mamas and the Papas singing ‘California Dreamin’ used to sum up how I felt about the autumn. Their song said they wished they were away from the cold north east of the United States and instead were in California. I wouldn’t have minded where I was when the leaves were brown and the skies were grey, just so long as it was warm and sunny and the days lasted forever.

I put my change into the girls’ collection bucket gathered up my bags and went on my way. ‘California dreamin’ or not, it was autumn in Ballybrack and there was nothing I could do about it. I long ago gave up my dream of becoming rich and spending six months of the year in Australia and the other six months in the south of France.

I have never liked the autumn; since I was a child I’ve always dreaded the shortening of the days. I remember talking to someone in a hospital, about twelve or thirteen years ago, about it. ‘SAD’, she said.

‘No’, she said. ‘SAD – seasonal affective disorder, it’s caused by a lack of light’.

I could have told her that. I don’t know if the clinical name for feeling miserable in the autumn has changed since then. Whatever its name, feeling like the words of California Dreamin’ remains the same.

The one thing that helped me was a speaker I once heard on the radio saying that autumn was the earth taking a rest, sleeping from evening until the morning in the way that we do. If God designed us in a way that we need to rest at night, then we should look at the world in the same way, it needs to rest through the winter.

I walked across the car park with my shopping, whistling ‘California Dreamin’ (out of tune) and looking at the colours of the leaves on the trees. It wouldn’t be bad to be in California, but I think I can cope here.