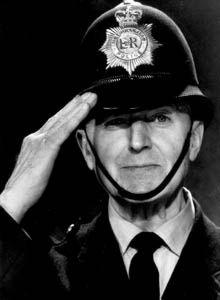 Dixon of Dock Green is back on BBC Radio 4.

I used to love the television series when I was young. Jack Warner as George Dixon would appear on camera in his London bobby’s uniform and salute the audience with his warm ‘Ev’ning all’, then introduce the story for that episode; at the end there would be a few words of wisdom and a goodbye from Dock Green for another week.

It is amazing, in retrospect, to think that George Dixon was still on the beat in 1976, 21 years after the first episode. Dixon of Dock Green seems to belong to a different age, a time when the world was more simple; when coppers were feared and where villains got caught.

Perhaps the world wasn’t so simple – the opening episodes were set in post-war London, in the years after the worst war in the history of humanity. The stories were set in an East End of London that was full of slums and gangland figures and all the human vices that have always marked city life. Perhaps George Dixon’s folksy view of the world suited television audiences and didn’t do much to reflect the complexity of human life. Yet even if Dixon is overly simplistic and maybe the world was not so straightforward – his world was a very different one from ours.

George Dixon walked the beat in a time when community meant something, when neighbours knew each other, when there was a sense of obligation to people down the street, when there was a bond of trust between local groups and the authorities. What would PC Dixon do now in response to drug dealers in a community where walking the street is a dangerous activity?

Maybe the biggest change is that George Dixon walked the beat when individuals meant something, when the ordinary bloke who went into Dock Green police station mattered, when there weren’t statistics, there were just people.

George Dixon’s “Ev’ning all” was so reassuring because you felt he was talking to you. You felt that the world was in control and that there were blokes out there who would make sure you were safe.