Last week in the United States, Pat Roberston launched a scathing attack on the voters of Dover, Pennsylvania, who had thrown out a school board who had tried to introduce the teaching of the Christian fundamentalist doctrine of ‘creationism’. Robertson had previously gained a huge profile when suggesting that the President of Venezuela should be killed.

One of the most important books in the Bible for the Christian Right is the Revelation to Saint John the Divine, the last book in the Bible.In reacting against the comments of Robertson, there is a danger of many Christians throwing out part of their own heritage.

The Book of Revelation used to terrify me. Our staff at school were very deeply steeped in a brand of Protestant fundamentalism that found all sorts of stuff in Revelation to tell themselves that a time was near when Jesus would return and take them to be with him, leaving the world in the hands of Satanic powers and those left behind to a future in hell. 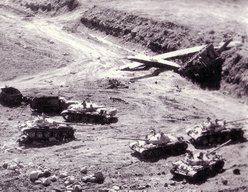 Some versions of what would happen were slightly more optimistic for people like myself, Jesus would return as he said, taking to himself those who had believed in him, but then there would be a period of three and a half years in which there would be a chance for those who had been left behind to repent. There was an American company called Chick Publications that produced comic books, which were distributed in school, explaining how all these things would happen.The writers of such stuff said that the ‘ten-horned beast’ in Revelation 13was the European Community (there were nine members at the time and a tenth was expected) and identified other texts from the book with things happening at the time, particularly the conflict in the Middle East in the 1970s.

I don’t suppose I should have been surprised when I later discovered that Catholic fundamentalists used the same book, and in some cases the same texts, to support the things they believed. Some of the wilder claims about Mary the mother of Jesus found their origin in obscure references in the Book of Revelation.

When I went to theological college the approach tended to be much more analytical. The book was part of a tradition in Jewish writing dating back to prophets such as Ezekiel and Daniel and that much of it would only make sense to readers at the time. John was writing at a time when the Christian community in Rome was suffering terrible persecution under the emperor Nero. John dare not speak the name of Nero, so he calculates what his name would be in Hebrew characters where each letter also represented a number, and he gets the number ‘666′.

There has been a tradition amongst Anglicans of avoiding this last book in the Bible. The extremists on both sides have made so much of this book, that we have avoided getting involved with it. I think this is a pity because John’s insights can help us with being Christians.

I think what many people need today is the confidence to go on being Christians when everything and everyone around them says they should give up. The faith that has held people down through the generations is losing its grip on people’s lives. Why go to church when there are other things to do? Why keep the Commandments when other people don’t bother? Why believe when it seems to make no difference?

We can’t understand all the things John says in Revelation, but we do know that the people reading what he wrote were going through difficult times. It would have been much, much easier for them to have given up what they believed; life would have been so much safer. What confidence could they have had that their faith was going to survive? They couldn’t look back on 2,000 years of Christian history in the way we can.

At the heart of what they believed, something that comes through again and again in the Book of Revelation, is a God who is real, a God who is present, a God who is active.”I am the Alpha and the Omega,” says the Lord God, “who is, and who was, and who is to come, the Almighty.”

There used to be graffiti on a wall in Belfast that said,

“For those who understand, no explanation is necessary.

For those who refuse to understand, no explanation is possible.”

If we have the sense of God that the first readers of the Book of Revelation had, then we don’t need any explanation as to why we go to Church or why we try to live by the Commandments; we do these things because our faith tells us to do these things. If we refuse to understand God in the way that Saint John writes about him, then no explanation of Christian worship or Christian living will really make sense and we will always be inclined to do what we want.

Belief in this God of Revelation sustained the early Christians in Rome through the most horrific trials. Anglicans are challenged to have the same faith. The faith that places first call upon who we are, on what we do, and on what we have, belief in ‘the Lord God, “who is, and who was, and who is to come, the Almighty.”