Miriam sang words from the Christmas song Jingle Bells as we cleared the table this evening; for a moment I was transported.

My grandmother had a golden bell that hung above her drawing room window each Christmas. It was a musical box. Pull the clapper and it came out of the bell on a string; release it and the string slowly retracted to the notes of Jingle Bells.

Christmas was magical in those days; not that we had much, or that we ever went to church, but there was something about those childhood moments that defies any attempt to express it in words: a sensitivity, or a power to imagine, that disappeared as the years passed.

As I contemplated my memories of Jingle Bells, a passage from Sebastian Faulks’ brilliant novel Human Traces came to mind. Faulks’ character, Thomas Midwinter, is standing looking at the altarpiece at the Church of Sankt Jakob at Rothenberg in Germany, 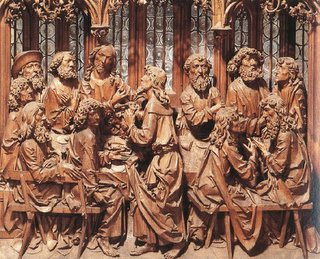 “Who were these primitive Galileans in their stiff robes? What had they to do with a church in Germany almost two thousand years later and with himself, living in the newest second of the present? They had doubtless imagined themselves to be the final word in humanity, as, at the moment they sat down to their supper, they were: like him, they rode the front edge of time into the darkness of the future. What he knew, and they could not have known, was that their species would change and that he, a modern man, would have developed in such a way that he was not human in quite the same way as they had been.

Looking at them, he saw beings in transition. One of them was endowed with a valued gift, which the others revered; but as he gazed at the muddled passions of the work of art, it seemed suddenly clear to Thomas what Christ’s gift was. It was not that he was more developed or refined than the fishermen who were his apostles: it was that he was less so. He alone possessed something their ancestors had lost: the power to hear voices and thus to commune with the unseen . . .

. . . The physical absence of the god was the precondition of all religious faith. If the deity was there, self-evident, there would be need for faith. But why was this the arrangement, thought Thomas, why should ‘faith’ be necessary? The obvious course for a thinking god would have been to make himself observable, not to make his power dependent on belief in the unverifiable. The hypothesis that underlay religion was merely an argument from necessity, because there was no need for faith unless there was absence. The interesting question, then, was whether that ‘absence’ was a caprice of an all powerful deity or a real vacuum that followed a real presence: had someone or something actually vanished?

To put it another way he thought: the situation that confronted him at that instant in Rothenburg was of a world in which millions of people worshipped something they could neither see nor hear. The explanation traditionally offered was that this not-being-there was central to the divine plan for human existence; that the world had either been created or had evolved with this childish paradox at its core. But suppose, he thought, that there was a simpler more credible explanation: that the absence was real; that the conditions of life did not comprise some infantile test of ‘faith’, but that something once present had genuinely disappeared.

Suppose that what had disappeared was the capacity to hear voice or voices of the god. Once, all those fishermen would have heard a god; now only Christ could. For early humans separated from their group – the young man, for instance, dispatched to fish upstream — the ability to hear instructions, to produce under the influence of stress or fear the voice of the absent leader or god had once been a necessary tool of survival; but as the capacity to remember and communicate through words had slowly developed, humans had lost the need for heard instruction and comment. The ability to do so had long since ceased to be important and was in fact now like the sightless eyes of bats — a vestigial ability. In this way the Bible all made sense, not as a ragbag of metaphor andmyth, but as the literal story of a people crying in the wilderness; for what once had been theirs. ‘I will lift up mine eyes unto the hills, from whence cometh my help. ‘What was that if not the forlorn land agonised call of the solitary human -whose once ever-present, helping voice had left him? He could picture the terrified, lone man, bent over his little bit of agriculture, looking up, craving a voice from the silent hillside.

Thomas felt quite calm as he gazed into the carving. At the beginning of the Bible, everyone – Noah, Abraham, Moses – seemed to hear God’s voice externally; then it was heard only by a minority, who became priests; then the gift became rarer, so the infant Samuel could hear but the old priest Eli could not; and then by the time of the New Testament, Christ alone — and perhaps Paul — could hear voices”. (Human Traces pp 205-207)

Reading Sebastian Faulks’ words for the first time, I thought them contrary to what Christians believe. Re-reading them, I perhaps have another insight into what Saint John tries to communicate to us in the opening verses of his Gospel. We can no longer hear God’s voice, so God himself takes on our flesh to come to talk to us