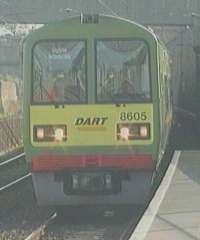 Riding back from a rugby match on the DART last night, Michael and I laughed at one of the features of the new carriages. Above the doors there is a row of coloured lights: a red one for each station and orange ones in between, as the train progresses along its route, all the lights turn green. The legend underneath explains that the orange lights show the expected route, which is fine, except that heading south there is only one route. The line goes straight down the coast, where might the train go if it didn’t follow the expected route? Into the shopping centre in Blackrock? Down the pier in Dun Laoghaire?

DART trains, like most things in life, follow the expected route. When things depart from the route, there are problems. There used to be a British sitcom in the 1960s called ‘On the Buses’. I don’t remember anything about it, except one episode where one of the drivers hears there is trouble at home and drives his red double-decker London bus to his house; which wouldn’t have been a problem, had it not been for the fact that the bus was full of passengers. I remember being perplexed at the time about how all these people were going to get where they expected to be!

We stick to the expected routes because when we leave them we take others with us. One of our bishops has just resigned and left his wife and family because he does not wish to continue with his marriage or his ministry; which might be a brave choice for him, but which takes many other people away from the expected route, it leaves them feeling lost and marooned.

Being a Christian might be boring at times, it might mean sticking to the route ahead even when we feel that we would really like to go in another direction, but in the boredom and predictability there is security and happiness for others. The orange lights might stretch out in a long line before us, but perhaps it is in following them that we stay closest to Jesus.