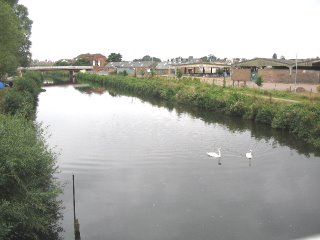 I walked out of the hospital door and across the pavement to the road that led to the car park. There was an indefinable smell of spring mixed with a scent of car exhaust.

ho have cash in their pockets are welcome.

e semi-literate scrawl. The back of the tsnda ta the county cricket ground aching Just for a moment, I was far from the hospital, walking along the banks of the river, its murky surface disturbed by ducks or swans searching for crumbs from passing shoppers. It’s not an attractive walk. The banks are often covered with weeds and briars. Litter hangs from thorns. The walls beside the path under the bridge have aerosol sprayed names; to call it graffiti would be flattering the semi-literate scrawl. The back of the stand at the county cricket ground has forbiddingly high railings and fences declaring that only those who have cash in their pockets are welcome.

Walking from a drab car park with faded lines, beside a cattle market that is a ghost of its former self, to a high street that is without beauty or character, along a tarmac path where people might bid you the time of day or, then again, might not, would not sound an attractive proposition, but at that moment it would have been a delight.

My little town, where I was a kid, where I walked with ambitions and plans for the future and schemes to change the world, all of which is possible when you are eighteen, would be a refuge, an escape, from a world where I don’t know why good people have to suffer and where I have no words to explain why they die.

To walk from the car park along the river bank into a street where I was anonymous and where there was no pain would have been a deliverance from the world as it is.

But it’s in the world as it is that we find Jesus.