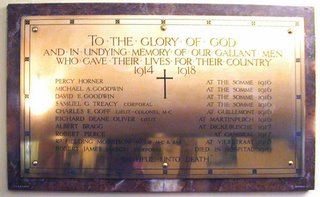 This Saturday at 7.30 a.m. we are holding a church service.It is an odd day and an odd time for a Church of Ireland service, but we are remembering the 90th anniversary of the first day of the Battle of the Somme.

It is hard to imagine what would have been the impact of that battle upon a small community, in what would have been a very rural part of south County Dublin.Ballybrack was no more than a cluster of cottages around a crossroads and a collection of grander houses in their own grounds.

Ten members of our church died in the 1914-1918 War, three of them on the first day of the Somme, another one within a fortnight.

They had travelled north to Draperstown in Co Derry to enlist with the Inniskillings, Percy Horner was twenty; the Goodwin brothers have no age recorded, meaning they were probably no more than teenagers, nor does Samuel Treacey, who died on 14th July.When they enlisted they would have know what the war was about, the horror stories of 1914 would have reached their ears, yet they still voluntarily went to join an army that would lead them into mud and slaughter.

1st July 1916 would have been the very first day upon which they would even have seen action.The 36th (Ulster) Division had been brought in as part of the huge army that was assembled for what was to be the “big push”.In his dairy an English soldier, Lance Corporal Sidney Appleyard was to write, “After four months the death-roll on both sides totaled nearly 1¼ million. We lost 600,000 to gain 45 villages, eight sizeable woods and an advance of nearly six miles. By military arithmetic it was a great victory”.

A great victory? To walk through the graveyards at Thiepval bring a lump to the throat; reading diary entries from the trenches as I prepared our service yesterday brought tears to the eyes. What on earth was all this for?

I realized standing on the Somme one summer that I would never have made a general, lumps in the throat and tears in the eyes get in the way of sending teenage boys to certain death.