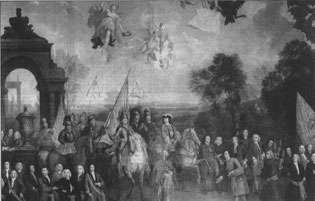 The 13th July was always a strange day.

I never understood why either Easter Tuesday or 13th July were holidays of any sort. Some of the followers of Orange affairs would go off to Scarva for the “sham fight”. An amateur re-enactment of the Boyne battle between William and James, which seemed rather dull any time I saw it on television, particularly when compared to the huge re-enactments staged by groups like the Sealed Knot in England.

There was always the temptation to say to the supporters of the Williamite cause heading off for the day that they of course realized that the Pope supported the Prince of Orange because he was seen as a bulwark against the growing power of Louis XIV of France. The temptation was easily resisted, the facts of history were never allowed to get in the way of straightforward prejudice.

Pieter van der Muelen’s painting, The Entry of King William into Ireland, was given by the Dutch government to its Northern Ireland counterpart and was hung in the House of Commons at Stormont when it opened. However, In 1934, a former RUC Inspector and “extreme right-wing bigot”, Unionist MP John Nixon (1880 – 1949) led a gang of Loyalists into Stormont where they slashed the painting with a knife and threw crimson paint over the image of the Pope.

The Bible, so much loved of those of the Orange tradition, talks of the truth setting people free. Perhaps a good first step towards a new Ireland would be for people to acknowledge the truth of their own history.