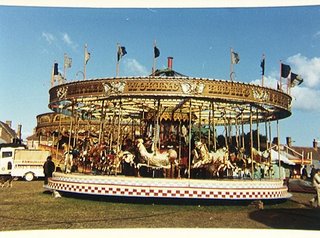 The wind is doubling the trees over and the rain is coming in sideways and I need to go out and spend an afternoon knocking on doors.

Memories arose of visits to Bridgwater Fair, which still takes place at St Matthew’s Field in late-September each year. Was there always mud? I certainly remember going in Wellington boots.

The street approaching the field was lined with ‘cheapjacks’ intent on parting people from their money. The offers were too good to be true, but everyone knew they were, that was part of the entertainment, watching to see who might be taken in.

As the field was approached there was a gateway through which the countless thousands of feet passed. The ground would have been well churned up by the Saturday evening, the closing night of the fair.

Stalls and other stuff were OK for grown ups, it was the funfair that was the magnet for a small boy clutching a half-crown. Looking back now I’m sure it was gaudy and garish and completely unsophisticated, but to a child who lived in village of 300 people and went to a two classroom school that had just 40 pupils, this was the most amazing place.

The world has become a prosaic place and there is work to do.

Do you think people would mind if I wore my wellies?