I pushed the begonia plant under my arm and set off for the car park.

Banter with the man at the checkout about getting a free plastic bag in Newry whereas it would cost me 15 cent on the other side of the border had distracted him from asking what a clergyman up from Dublin was doing buying a large red begonia plant at Marks and Spencer in Newry. The conversation would probably have become so complicated that he would have wished he had never asked. 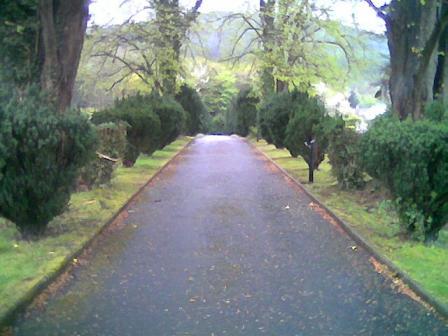 I continued my journey up the coast of Co Down until reaching a little graveyard on the lower slopes of Slieve Donard. Time to unwrap the begonia plant; I can never understand why various layers of cellophane are necessary, nor have I ever fathomed out how to unwrap things with grace and decorum. After various pulls and tugs, the plant and its pot were liberated from their plastic captivity and I walked the yew lined avenue up to the grave.

Pat was no relative of mine. She was my mother-in-law’s cousin, but was an only child and was like a sister to my mother-in-law. Pat grew up in a stern Northern Protestant home, being sent to boarding school that she hated so much that she took the bus home and refused to return. Training as a nurse, she served in India in the war and then in a burns unit for war victims in Sussex before returning to Northern Ireland. My mother-in-law suggested that there was once the possibility of a young man, but he was of the wrong tradition, and Pat never married. Widely travelled and adventurous, Pat lived a very full life until the onset of dementia which trapped her in a nursing home for the last five years of her life.

I placed the plant amongst the granite surrounded patch of gravel that covered the grave. The wind was cutting in off the sea and I was uncertain about the plant remaining stable, its abundant foliage would catch the wind. Hollowing out a space, I pushed the pot down into it and then banked gravel up all around it. Anyone watching would have wondered at the strange goings on – anyone sensible would not have been digging with their hands, particularly on a day when the rain was being whipped sideways.

I stood back and looked. I was wet and my hands were dirty and I had an appointment with Pat’s solicitor in twenty minutes. I wasn’t sure if Pat would have liked the flowers, they were very red, but they weren’t for Pat. Pat is on another shore and in a greater light. The flowers were for me; they were me saying to myself that this person mattered, that even if there is not another soul who ever visits this grave, I will. The flowers were about me trying to hold onto my trust in the infinite worth and dignity of each individual.

Pat’s solicitor gave me a strange look when I explained that I was wet because I had been taking flowers to the grave. If he had been tempted to say that this wasn’t a necessary part of the executor’s duties, he thought better of it.

Listening to the wind blowing here in Dublin this evening, I hope my begonia pot is still firmly upright.

It has been a day filled with odd thoughts.