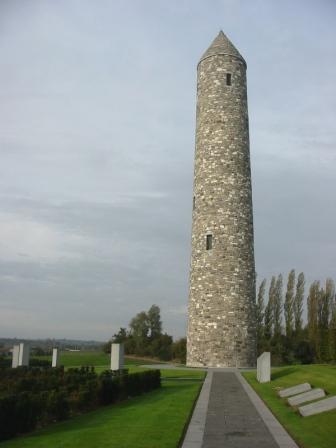 The Irish Times today printed a letter I wrote last week requesting that the Taoiseach not hold the General Election on Thursday, 7th June, this being the 90th anniversary of the Battle of Messines, a moment in history when Irishmen stood shoulder to shoulder and a place now marked with a Peace Park inaugurated in 1998 by President McAleese, Queen Elizabeth and King Albert of the Belgians.

Researching further into Messines, I found words from “Woodbine Willie”, the Revd Geoffrey Anketell Studdert-Kennedy, one of the most famous of all British army chaplains.

Here are Studdert-Kennedy’s thoughts inspired by the first day of Messines:

“On June 7th, 1917, I was running to our lines half mad with fright, though running in the right direction, thank God, through what had been once a wooded copse. It was being heavily shelled. As I ran I stumbled and fell over something. I stopped to see what it was. It was an undersized, underfed German boy, with a wound in his stomach and a hole in his head. I remember muttering, “You poor little devil, what had you got to do with it? Not much great blonde Prussian about you. Then there came light. It may have been pure imagination, but that does not mean that it was not also reality, for what is called imagination is often the road to reality. It seemed to me that the boy disappeared and in his place there lay the Christ upon his cross, and cried, “Inasmuch as ye have done it unto the least of these my little ones ye have done it unto me.” From that moment on I never saw a battlefield as anything but a crucifix. From that moment on I have never seen the world as anything but a crucifix.

In an Ireland searching for permanent peace and reconciliation, Woodbine Willie’s vision points us to a deeper understanding of the pain of those not from our tradition.