Standing in the sunshine, we drank tea and pondered the world

“Do you know”, he said “some people imagine heaven as a great big family reunion?”

“Aye.” I said. Alan’s doctorate is from Princeton and he is a good Scripture scholar. I wasn’t about to challenge his line of thought.

“I have to try to point people to a right understanding”.

It might not matter to some.“We’ll find out when we get there”, I was told once. But it’s an important pastoral question. When a young couple lose their little boy at the age of 21 months, it matters a whole lot where he has gone.

It’s a serious theological question. If justice is part of God’s nature, then there must be some place of eternal reward. If heaven is no more than wish fulfilment, then short lives lived in Darfur are without meaning or purpose.  Being realistic, if this is it, if there is nothing else, then most lives are without meaning or purpose. Maybe it’s better than the nasty, brutish and short existence described by Thomas Hobbes, but not much better.

Since Saturday, I have pondered whether heaven can or cannot be a big family reunion. Being a poor Scripture scholar and even worse theologian, I had rather been hoping it might be. I was hoping to see my Nan and Grandad again, if for no reason other than to ask my Grandad all the questions I never asked him.

I also wanted to see my Uncle Bill. Just to say ‘thank you’ for all the happy memories I have of him and how he can still make me laugh two years after he died. 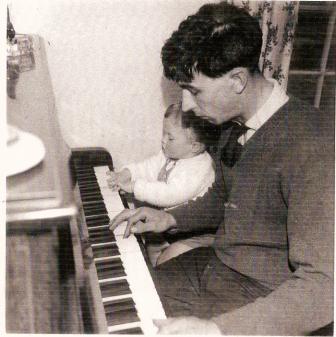 Just before Christmas, one of my aunts gave me a scan of a photo she had of Uncle Bill. It’s been sitting on my bookshelf since. I suppose I should get it framed, but that would give it a sense of finality, a sense that it had been archived. Propped on the shelf like a holiday snap just back from the chemist’s, it has an impermanence, a transitory nature, that creates an illusion of it being contemporary. Bill played in a band when he was young, and once even cut a record.

Will I never have a chance to ask him what he was playing in the photo? Or to ask whether his young nephew to his right was putting him off?