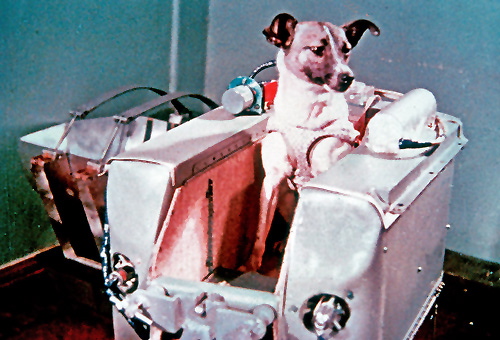 There was a significant anniversary last Saturday. It was the 50th anniversary of the launch of the first living being into orbit around the Earth.  The living being in question was a terrier called Laika meaning ‘barker’ and the poor old thing didn’t get much time to bark.  The Sputnik 2 spacecraft had no re-entry vehicle and it was projected that after ten days, Laika would be put to sleep with poisoned food.  In 2002 the Russians admitted that poor Laika had died after a few hours of the mission, from stress and overheating.

Looking back, it’s hard to imagine the excitement that the Space Race created through the 1960s.  The first manned missions, the first spacecraft to orbit the moon, the first moon landings, each moment memorable in the mind of a small boy.

There was huge optimism, Neil Armstrong expressing the belief that he would return to space as part of a regular tourist industry.  There were even cards of spacecraft inside packets of tea that could be collected and stuck in albums.  The names of the craft were household words.

Then the space powers, the United States and the USSR, seemed almost to lose interest in the project.  They had done all they could do and there was nothing more to be achieved with the technology that humanity possessed.  The Hubble space telescope and the long journeys of unmanned probes have told us more about our solar system and about our little corner of the universe, but human beings have remained very firmly Earthbound.

Since the demise of the poor barker, we haven’t made much progress.  Trips to moon are like going out of the back door to a shed in the backyard, we haven’t even got the technical capacity to go to the house next door, to the red dust of Mars.  When we have the technology to do endless pointless things, like creating extraordinary computer games and filling the internet with fifty million pointless blogs, you would think that someone might have invented a propulsion system good enough to get people next door and back in a half reasonable time.