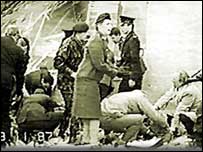 I forget most sermons I hear by Sunday lunchtime, even though I have generally preached them.

On the first Sunday of September of 1994, I remember what I said, and it wasn’t even written down. It was a retelling of Aesop’s Fable of the sun and the wind at a family service in a little parish church on the east coast of Co Down, where members of the congregation would each have had their own tale of the Troubles, including the deaths of members of their own families.

“The Wind and the Sun were disputing which was the stronger. Suddenly they saw a traveller coming down the road, and the Sun said:”I see a way to decide our dispute. Whichever of us can cause that traveller to take off his cloak shall be regarded as the stronger, you begin.”

After twenty-five years of killing, the IRA had acknowledged the previous week, in August 1994, that they could not beat people into submission, no amount of violence would cow a community.

Seven years previously, the carnage in Enniskillen on 8th November, 1987, twenty years ago today, was an example of IRA force at its worst. After the awful events of that Sunday morning, the words of Gordon Wilson, whose daughter Marie died in the bombing, were shafts of brilliant sunlight in very dark times, a sign that darkness could never overcome the light.