A friend in the North worked for the Inland Revenue in the early-90s. It seemed a fascinating place in her tales of her daily work, they appeared to be experts in human sinfulness.

One man read all the local papers each week, except it wasn’t the news he read, it was the advertisements – who was selling what where. He also kept a careful note of the reports from the marts, noting the reports of which animals were sold at what prices. Some papers had carried names of which farmers had got whet prices; it was a practice that came to an end! The information gleaned from the advertisements would be compared with the declaration of activities on the annual tax returns. As well as the papers, the publication of the Yellow Pages telephone directory was an opportunity for careful scrutiny – advertising some service that had been undeclared in your annual tax return could bring the auditors to your office or your house very quickly.

Whatever stories people might tell about evading taxes were generally only bravado before the inevitable day of reckoning. The inspectors had heard every story, and could have added many more fantastic ones to the tales told by would be evaders. There was no escape. They seemed to have more power than even the police; if a lifestyle was incompatible with declared income, then you were guilty unless you could show yourself to be innocent. 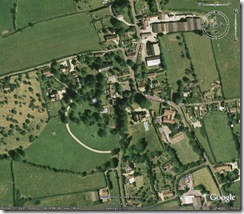 Drinking tea and messing around with Google Earth, I realized that the authorities now have an even bigger armoury. Scanning over my home village at the height of 280 metres, it would be difficult for someone to hide a lavish lifestyle. There are swimming pools behind two houses at the village green. To the west, the man with a field mowed as an airstrip has two aircraft in his grounds. If you have built an extension, or have more cars than your declared income would make reasonable, or your house looks somewhat larger than would be paid for in the £200 weekly income you declared in your tax return, then be wary, in fact, be very afraid; the taxman can sit in his coffee break looking down on your house.

There is a prayer in the Anglican Communion service called the Collect for Purity, it includes the lines, “unto whom all hearts be open, all desires known, and from whom no secrets are hid”. Whatever we may believe about God knowing the secrets of every heart, the taxman certainly does.